Lee Surrendering to Grant at Appomattox

It’s one of the most momentous events in American history: Robert E. Lee’s surrender to Ulysses S. Grant on April 9, 1865, which effectively ended the Civil War, although other southern forces would still be surrendering into May. It was momentous yet modest and low-key as the two generals met with just a few aides in the small parlor of Wilmer McLean’s house in Appomattox, Virginia. A small irony is that McLean was present at both the beginning and the end of the war: he had moved from his original house on the Bull Run battlefield to get as far away from the theater of war as possible.

The meeting at the McLean house was the climax of a year’s campaigning after Grant had moved against Lee in May 1864, initiating the Overland Campaign, with its near-constant warfare. By constantly engaging the Army of Northern Virginia, Grant had pressured Lee to move south and east in keeping the Union army away from Richmond.

By June the armies had reached stasis as they entrenched around Petersburg; nine months of siege warfare followed. The pressure finally told: by March 1865, Lee’s army was wearing out, desertion rates were high, and resupply of everything from ammunition to food became impossible. Lee tried to buy time with an assault late that month, but it failed.

A Union counterassault finally forced Lee away from Petersburg and Richmond, both of which fell on April 3. Grant continued to harry Lee as the Confederate army attempted to escape south to find supplies and make join General Joe Johnston, who was retreating through the Carolinas, pursued by William Tecumseh Sherman’s Union army. The end came suddenly, after a brief exchange of correspondence in which Grant urged upon Lee the hopelessness of his position. The meeting at the McLean house was the result.

Alonzo Chappel’s homely little painting depicts the scene as it was, avoiding the pomp of later depictions, in which the room has grown in size and is crowded with staff officers. Lee had dressed in his best uniform for the saddest moment in his life, while Grant was more casually turned out because his dress uniform was miles away in the Union baggage train.

As might be expected, the occasion was awkward, and the two generals exchanged small talk until Lee reminded Grant why they were there. Grant, who had the ability for swift and clear written expression, quickly drafted the terms of surrender, which focused only on military matters. Lee asked that the southerners be allowed to keep their horses, which they owned; Grant agreed. Grant also agreed to distribute rations to the hungry Confederate army.

Formalities concluded, the group went back outside, and Lee rode away on his famous battle horse, Traveller. Union troops began to cheer as news spread of the war’s end. A celebratory cannonade began, but Grant ordered it stopped in respect for the defeated foe, “as we did not want to exult over their downfall.”

The terms that Grant imposed—and Lee accepted—were one of the last notes of clarity as the war ended and Reconstruction began. When William Tecumseh Sherman accepted Joseph Johnston’s surrender in North Carolina on April 26, he unwisely included political commitments about the postwar South; Andrew Jackson’s new administration forced him to backtrack. The incident presaged the moral and political confusion of Reconstruction, especially over the condition of the now-free slaves.

In retrospect, the surrender at Appomattox has become invested with nostalgia in part because of the dignified and humane conduct of both Grant and Lee in this final act of a heroic and tragic year of war between America’s two greatest generals.

See the painting Lee Surrendering to Grant at Appomattox by Alonzo Chappel in "One Life: Grant and Lee: “It is well that war is so terrible. . .” through May 25, 2015 at the National Portrait Gallery. 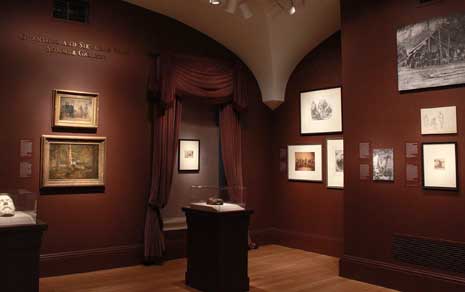