Ruth Bader Ginsburg, who was the second woman to be appointed to the Supreme Court, was a pathbreaker in the male-dominated field of law. After graduating at the top of her class at Columbia Law School (1959), she had difficulty finding a job because it seemed that no one would hire a woman lawyer. This made her even more driven. In 1972, she co-founded the Women’s Rights Project of the American Civil Liberties Union. She successfully argued six gender discrimination cases before the Supreme Court, yet she referred to her style as being like that of “a kindergarten teacher,” seeking to change ideas by building consensus. By the 1980s, her steady progress as a lawyer convinced justices of the Supreme Court that the Fourteenth Amendment’s guarantee of equal protection included equality of the sexes.

In 2013, Ginsburg gained a loyal following after her rousing dissent of Shelby County v. Holder. The decision invalidated the provision of the 1965 Voting Rights Act that required southern jurisdictions to receive federal permission before changing voting procedures.

In 2016, she wrote, “How fortunate I was to be alive and a lawyer when, for the first time in U.S. history, it became possible to urge, successfully, before legislatures and courts, the equal-citizenship stature of women and men as a fundamental constitutional principle.” 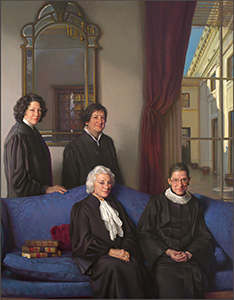 Watch video interviews with each of the four justices