The Smithsonian’s National Portrait Gallery recognizes the life of acclaimed journalist and author Tom Wolfe with a photograph by Yousuf Karsh. The portrait is installed in the museum’s In Memoriam space on the first floor, and it will remain on display through June 3.

Born in Richmond, Virginia, in 1930, Wolfe earned a doctorate in American studies from Yale University before embarking on a career as a journalist and social chronicler. Writing for Esquire, Harper’s and other magazines, he crafted innovative pieces that focused on a wide range of topics, including stock-car racing and sports figures. In the 1960s and ’70s, Wolfe gained a reputation for his fresh writing style and his contributions to “New Journalism,” an experimental genre of nonfiction literature. Collections of Wolfe’s articles include The Kandy-Kolored Tangerine-Flake Streamline Baby (1965). Subsequent books were The Right Stuff (1979), about the early years of the American space program, and From Bauhaus to Our House (1981), his criticism of modern architecture. His satires, such as The Bonfire of the Vanities (1987), continued his social commentary in fictional form. In Karsh’s image, the ever-dapper Wolfe sports his trademark white suit. As a non-conformist, he felt it was “much more effective to arrive at any situation as a man from Mars than to try to fit in.”

This photograph of Wolfe was taken in 1990 and is part of the more than 100 portraits by Karsh in the National Portrait Gallery’s collection. In 2014, the Portrait Gallery presented “Yousuf Karsh: American Portraits,” the museum’s first solo exhibition of the internationally renowned photographer. A traveling version of that exhibition is currently on display at the Jimmy Carter Presidential Library and Museum in Atlanta through May 20, the first stop of a four-city tour. 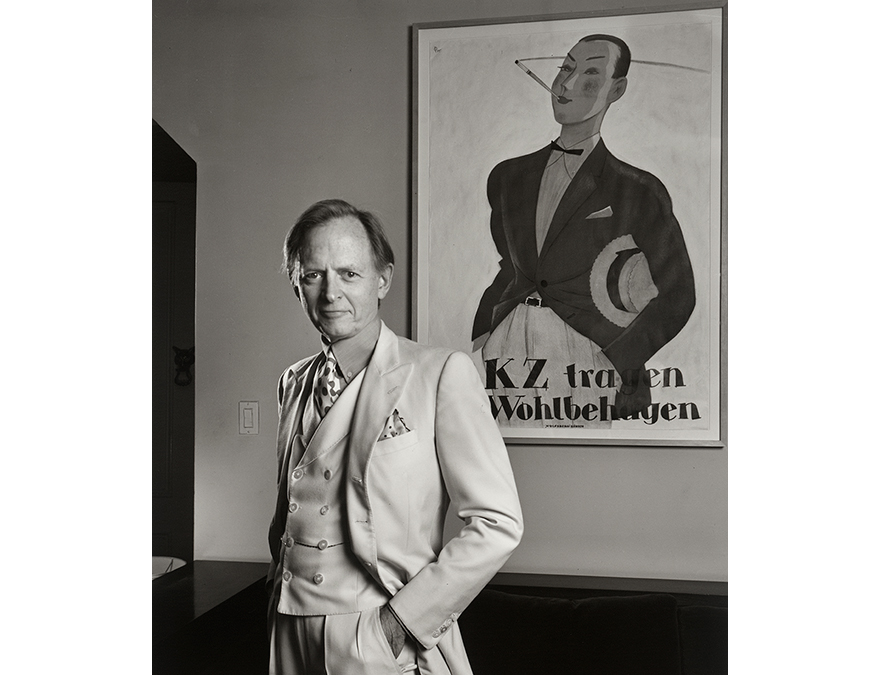