The museum is currently closed, but all portraits featured in the exhibition may be viewed here online.

Visionary presents several of these portraits, most of which are gifts, or promised gifts, to the National Portrait Gallery. Each work was created by a major American artist and stands as a testament to the Cummings’ creative vision and enlightened patronage.

Due to the museum’s closure for much of 2020, only a selection of the Cummings’ gift is on view. Robert McCurdy’s paintings inaugurate the exhibition, and in December, portraits by Nelson Shanks, Chuck Close, and Jack Beal will be installed.

Warren Buffett is the chairman, CEO, and largest shareholder of Berkshire Hathaway, a financial services and investment firm headquartered in Omaha, Nebraska. Often recognized for his successful leadership and foresight, he is regularly listed as one of the wealthiest individuals in the world.

Buffett, who made his first investment at age eleven, started out in investment sales before branching out into investment partnerships. He acquired the textile manufacturer Berkshire Hathaway in 1962 and then sold the mill to concentrate on investments. Buffett is known for his belief in long-term value investing and still lives in the house he purchased in 1958. Personally frugal and modest, he has pledged to give most of his immense fortune to philanthropic causes.

Toni Morrison’s first novel, The Bluest Eye (1970), tells the story of Pecola Breedlove, a young African American girl who longs for acceptance. With the publication of each new work, Morrison’s fan base and critical acclaim grew. She received the National Book Critics Circle Award for Song of Solomon (1977), the Pulitzer Prize for Beloved (1987), the Nobel Prize for Literature (1993), and the Presidential Medal of Freedom (2012). Morrison is primarily remembered as a fiction writer, but she also published works of nonfiction, such as Playing in the Dark: Whiteness and the Literary Imagination (1992), a provocative reassessment of the American literary canon.

On July 20, 1969, Neil Armstrong became the first man to walk on the moon, as mission commander of the crew of Apollo XI. He and astronauts Buzz Aldrin and Michael Collins thus fulfilled President Kennedy’s audacious challenge of 1961: “This nation should commit itself to achieving the goal, before the decade is out, of landing a man on the moon and returning him safely to the earth.” Armstrong subsequently oversaw aeronautics research at NASA and taught aerospace engineering at the University of Cincinnati from 1971 to 1979. He received numerous honors, including the Presidential Medal of Freedom in 1969.

A reticent man, it was not certain that Armstrong would agree to sit for his portrait, but after one of his closest friends, Robert L. Kirk, met with him and explained the process, Armstrong sat for the artist Robert McCurdy. The latter completed his photographs of Armstrong in 2006, but the painting was not finished until 2012.

Jane Goodall, the foremost expert on chimpanzees, first conducted research on the animals in 1960. It was then that the famed anthropologist and paleontologist Louis Leakey sent her into the field, where she assigned personal descriptions to the chimpanzees, thereby establishing a new methodology for studying primates. Because Goodall had not had training as a scientist prior to that experience, she has said that she felt more open to seeing commonalities between animals and humans. She went on to study animal behavior and earned a doctorate in ethology at the University of Cambridge.

In 1977, Goodall established the Jane Goodall Institute to protect chimpanzees and their habitats. Of her work, Goodall has stated, “the most important spin-off of the chimp research is probably the humbling effect it has on us: we are not, after all, the only aware, reasoning beings on this planet.” This is the latest portrait commissioned by the Cummings.

The boxer Muhammad Ali (born Cassius Clay) captured gold at the 1960 Olympics, won epic fights against George Foreman and Joe Frazier, and consistently stood up for what he believed was right. Even after his career in sports ended, he never left the public eye. His conversion to Islam and his opposition to the Vietnam War made him a lightning rod for criticism. In 1967, he was stripped of his heavyweight title and suspended from boxing after refusing to serve in Vietnam. While Ali eventually regained his title and returned to the ring, he increasingly involved himself in global social and humanitarian causes.

Artist Robert McCurdy began this portrait as Ali was nearing the end of his decades-long battle with Parkinson’s disease. Physically, he had grown weak, but his wife, Lonnie Ali, noted: “I learn every day from this man: the courage, the strength and the grace that he lives with his illness.”

As the spiritual leader of Tibet, the Dalai Lama has led his nation’s government in exile for many years. He fled his country and arrived in northern India in 1959, after Chinese troops suppressed an uprising of the Tibetan people seeking religious and political self-determination. Four years later, he presented a draft constitution as a means to democratize the administration of the nation in exile. The administration was fully democratized in 1990, and today, Tibetans living in exile in India (and in more than thirty other countries) have elected an expanded Tibetan Assembly.

Beloved throughout the world for his universal compassion and understanding, the Dalai Lama received the Nobel Peace Prize in 1989 for his nonviolent opposition to the occupation of Tibet. He has declared that when he is ninety years old, he will assess whether the institution of the Dalai Lama should continue after his death.

Nelson Mandela dedicated his life to ending apartheid in South Africa and establishing a democratic government. After studying law in Johannesburg, he joined the African National Congress in 1942, and began his long fight against the South African government’s racist policies through nonviolent protest. Following his active resistance in the early 1960s, including leading strikes for workers, Mandela was incarcerated as a political prisoner for nearly thirty years (1962–90). When Frederick Willem de Klerk became the president of South Africa, he ordered Mandela’s release, and the two worked together to end apartheid and lay the foundations for democracy. They were jointly awarded the Nobel Peace Prize in 1993.

After South Africa held its first democratic elections in 1994, Mandela was inaugurated as the country’s first Black president, with de Klerk as his first deputy. Mandela established a strong central government and protected the country’s economy until his retirement from politics in 1999.

One of the greatest writers of the twentieth century, Gabriel García Márquez was awarded the Nobel Prize for Literature in 1982 and is widely recognized for his mastery of fiction. Born and raised in Colombia, he studied law before embarking on a career in journalism and traveling internationally as a correspondent. He penned his best known novel, One Hundred Years of Solitude (1967), after settling in Mexico City, and then went on to write other classics, such as Love in the Time of Cholera (1985). García Márquez spent lengthy periods of time in Spain, France, and Cuba, and all the while, he published extensively. He embraced several genres but is most often associated with magic realism, which fuses realistic settings with fantasy.

Having grown up in Sydney, Australia, in a family that struggled financially, James D. Wolfensohn sought to alleviate poverty for others. As president of the World Bank Group from 1995 to 2005, he followed through with that goal. Wolfensohn trained as a lawyer and economist prior to becoming president of the organization, and he was driven by his belief that the World Bank should serve the world’s people, especially those without adequate resources.

Wolfensohn revitalized the World Bank’s efforts to eradicate poverty by illuminating the links among global economics, world stability, and peace. He initiated programs for debt relief to foster new growth in developing countries and waged a vigorous campaign to help nations combat corruption. After leaving the World Bank, Wolfensohn served on several boards and won many prestigious awards, including the 2017 Carnegie Medal for Philanthropy.

Desmond Tutu is a South African Anglican cleric, who received the Nobel Peace Prize in 1984 for his humanitarian work in opposing apartheid. As an advocate for human rights, he has emphasized nonviolent protest and kindness. Tutu received increasingly important positions within the Anglican Church during the 1980s and became the first Black archbishop of Cape Town in 1986, thus leading the church in South Africa. In 1995, President Nelson Mandela appointed Tutu as the head of the Truth and Reconciliation Commission, which investigated human rights abuses during apartheid. Tutu continues to support social justice issues and equal rights for all people.

In addition to the Nobel Prize, Tutu was awarded the Presidential Medal of Freedom in 2009. He has published a memoir, collections of essays and sermons, and The Book of Joy: Lasting Happiness in a Changing World (2016), which he co-authored with the Dalai Lama. 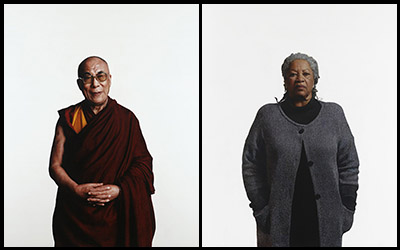 We invite you to download and print label text for this exhibition in advance of your visit.