As a public health precaution, all Smithsonian museums and the National Zoo will temporarily close to the public starting Saturday, March 14 until further notice. Please continue to check back frequently at npg.si.edu or si.edu for updates. In the meantime, please explore our website, resource materials and online exhibitions. 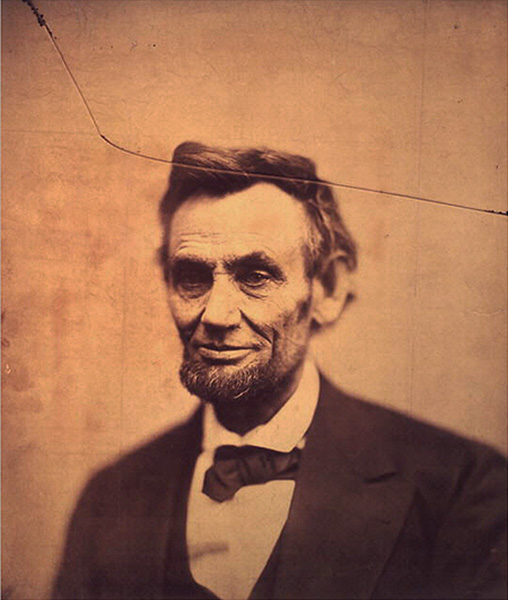 This medium-sized bust-length photograph of Lincoln has an unusual feature: a diagonal line resulting from a crack in the original glass negative bisects the composition. It begins in the upper left corner of the image and descends at a forty-five degree angle before turning sharply to the right to cut across the top of Lincoln’s head, just above the hairline. His calm face at the very center of the composition remains unscathed and in sharp focus. By contrast, the outline of his head and shoulders is blurred.

The dark brown of the sixteenth president’s clothing, hair, and shadowed face sets him apart from the plain background of warm tan. Since the tonal range is limited, the contrast between the crisp detail in the face and the hazy contours of the head and shoulders creates a sense of depth, making it seem as if Lincoln is emerging from a fog.

Lincoln faces our left. He is positioned at an angle, with the shoulder that fills the bottom right of the composition nearest to us. As he looks into the distance, dark, heavy eyebrows blend into the deep sockets of his eyes, which also have noticeable shadows below them. A pinpoint of light animates the eye on our right, while the left eye is cast in shadow. His cheeks are sloped and sunken. Two deep grooves travel down from the sides of his nose to the edges of his mouth, and another crease extends up from his chin to his cheek. A slight smile plays over his full lips.

The president’s prominent chin is covered by a bushy beard that is flecked with pale whiskers. His hair is combed at an upward angle to our left, revealing his broad and high forehead and a receding hairline above the right temple. Further to the right, part of his head and large ear are out of focus.

The details of Lincoln’s clothing are also indistinct. He wears a dark jacket with wide lapels over a matching vest. We can just make out a buttonhole on the right lapel. His white shirt bunches up from underneath the vest. A lopsided bow tie in plain dark fabric sits below his starched collar.

In February of 1865, just two months before Abraham Lincoln’s assassination, Alexander Gardner created this “cracked-plate” portrait, now considered one of the most important and evocative photographs in American history. The deep lines in Lincoln’s face evoke his weariness at the end of the Civil War, but he also exhibits a slight smile—perhaps a sign of relief as the restoration of the Union drew near. Lincoln had looked forward to continuing his presidency but was assassinated only weeks after beginning his second term.

At some point, possibly when the glass-plate negative was heated to receive a coat of varnish, a crack appeared in the upper half of Gardner’s plate. He made a single print and then discarded the damaged plate, so only one such portrait exists.

Alexander Gardner (1821–1882)
Internal dye-diffusion print copied from the original 1865 albumen silver print,
Printed 1981
Courtesy of the Polaroid Corporation
NPG.81.M1.D3
This modern copy is being shown to protect the original from further exposure to light.