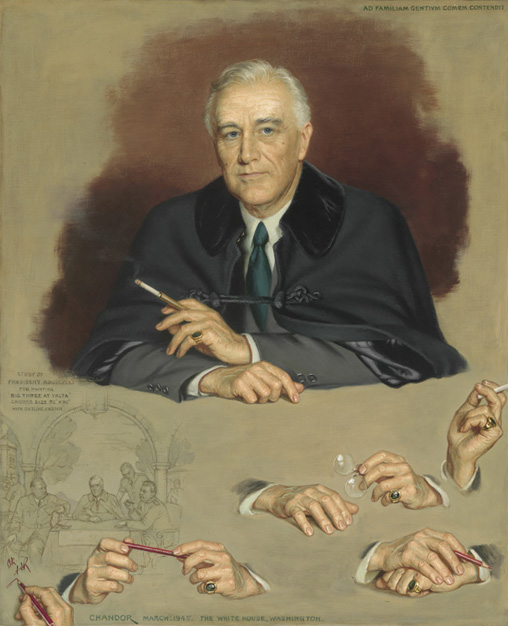 Franklin D. Roosevelt by Douglas Chandor, 1945, oil on canvas, approximately four and a half feet high by four feet wide.

This complex composition has three distinct components, all set against a tan background that resembles unpainted, unprimed canvas. The first, taking up most of the top half of the canvas, is a bust-length portrait of Franklin D. Roosevelt wearing a dark grey cape over a suit. Below him, a series of hands in different poses are arranged along a diagonal from the bottom left to the right edge of the composition, ending just below Roosevelt’s portrait. In the bottom left quadrant of the canvas there is also a study for a group portrait of Roosevelt, Winston Churchill, and Joseph Stalin. Above this vignette are several lines of text. The gray and black capital letters read: “Study of President Roosevelt for painting ‘Big Three at Yalta’ Canvas size ninety-two inches by ninety-two inches with outline sketch.”

Let’s begin with the portrait of Roosevelt in the center of the canvas. We see the President’s head, shoulders, and chest against a cloud of maroon paint that darkens to rich mahogany brown behind his shoulders. Although FDR faces us with his head tilted slightly to the left, he looks off into the distance toward the right. His forehead is lined and his silver hair is white at the temples. Roosevelt’s steely grey eyes are offset by charcoal eyebrows. Worry lines extend from the corners of his eyes and along the sides of his cheeks to frame his thin, closed lips.

The President folds his forearms on the undefined table before him, with one hand resting atop the other. A smoking cigarette in a gold holder is perched between the index and middle finger of the hand on our right. Its ember burns a bright reddish orange. On the little finger of that hand, he wears a signet ring with a green jewel set in gold. The hand resting underneath is closed, apart from the index finger, which is extended.

A thick cord holds Roosevelt’s cape together over his suit. Decorative knots adorn each end of the closure, while crisscross strokes in dark grey convey the thick weave of the fabric. The wide collar of the cloak is made of a soft, inky black material that catches the light like velvet or fur. Roosevelt’s cape opens at the elbows to reveal its smooth lining. Underneath, the president wears a gray suit jacket and a white dress shirt. His emerald tie matches the green stone of his ring.

Below this portrait, covering the bottom half of the canvas, are studies of Roosevelt’s hands. They are shown individually and in pairs.  At the bottom left, one hand writes on the canvas with a red pencil. Two sets of initials already appear above the red stroke it seems to be making. To the right, and overlapping the sketch for the group portrait, a pair of hands holds that same red pencil, with the signet ring on the little finger on the right. Moving up along a diagonal toward the middle, we see two more hands. The one on the left rests on the table, while the one on the right holds a pince nez, a pair of glasses without arms, and flashes the ring. At the right edge of the canvas is another version of that same hand, which extends backwards as if to flick the ashes from the cigarette between its thumb and forefingers. Below this group, in the bottom right corner, there is another pair of folded hands, the red pencil appearing again between the index and middle finger of the top hand and the ring on the bottom one.

Now we come to the final section—the small sketch for the full group portrait in the bottom left of the composition. This scene is painted in grisaille, or in shades of grey, which makes it look more like a drawing. Framed by an arch and columns, Roosevelt is seated at a table in the same pose as in the top half of this painting. Two other men sit with the president, flanking him on either side. To our left, Winston Churchill is seated in his military uniform. Although his body faces us, he turns his head to look at Joseph Stalin, who holds a pipe in one hand as he points to a large, unfolded piece of paper on the table. Another uniformed man stands behind the group, leaning in between Roosevelt and Stalin. Two other men stand farther in the distance behind Churchill. Beyond the arch in the background, there are trees, buildings, and a mountain.

At the bottom left of the canvas, the artist has written out the date and location of the sitting in black capital letters: “Chandor: March: 1945. The White House, Washington.”

Franklin Delano Roosevelt, whose presidency began in the throes of the Great Depression, led the United States out of its devastating financial crisis. During his first few months in office, he established the New Deal—a set of ambitious government programs that supported public works projects, put forth banking and business regulations, and offered other forms of federal relief. In 1940, before the United States entered World War II, he decided to seek a third term, pointing out that one should never change horses in midstream. In the diplomatic summits with Britain’s Winston Churchill and the Soviet Union’s Joseph Stalin, Roosevelt not only prosecuted the war but helped lay the groundwork for the postwar world.

In March 1945, Douglas Chandor spent several days at the White House, where he made sketches for a group portrait of Roosevelt, Churchill, and Stalin to mark their conference the previous month at Yalta, a resort on the Black Sea. The artist wished the painting to be “a conversation about peace,” but it was never realized because Stalin refused to sit for the portrait. Chandor included the composition for the painting on this canvas, along with studies of Roosevelt’s hands.