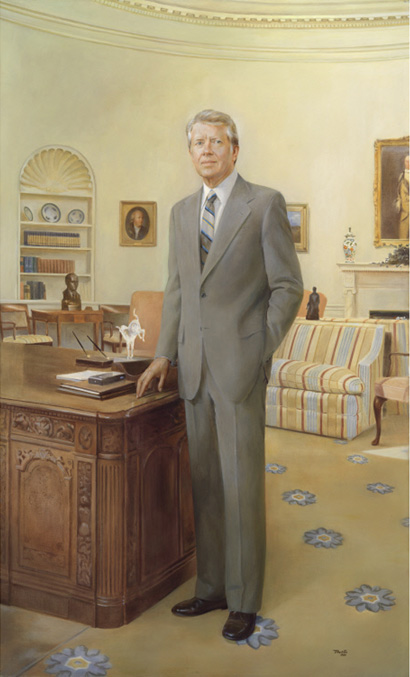 This is a life-size portrait of Jimmy Carter standing in the oval office. Wearing a pewter gray suit, the thirty-ninth president poses with one hand on the ornately carved dark brown wooden desk on the left side of the composition and the other hand in the pocket of his trousers. Behind him are the elegant trappings of this famous room, including portrait busts and furniture in shades of cream, blue, and brown. Paintings adorn the ivory-colored wall in the background. At the top of the canvas, the sweeping curve of the decorative crown moulding creates a sense of the room’s generous height and depth. Overall, the tone is relatively soft and even.

Although his body is angled slightly toward the desk at the left, the president turns his face directly toward us. His gray-blond hair is parted to the right, and his brow is slightly furrowed. Carter’s gray suit is immaculately pressed, but the lower button of the jacket remains unfastened. Underneath his jacket, Carter wears a white button-down shirt with a blue and grey diagonally striped tie. A pair of shiny brown leather Oxfords completes the ensemble.

Carter stands in silent conversation with the objects in the oval office. Among the supplies on his desk, which include notepads and a tape recorder, is a glass figurine of a donkey kicking back its hind legs.

Behind the President is the seating area. The sandy yellow carpet is decorated with a pattern of blue flowers with white and yellow centers. Laid out in diagonal rows, the flowers draw our attention to the two sofas beyond Carter’s desk. Arranged with their backs to one another, one faces us while the other is oriented toward a mantle on the back wall. The sofas are covered in light blue, gold, cream, and reddish brown vertical stripes. Rising between them is a small figurine of Lincoln. Next to the sofas on the right, there is a Chippendale chair upholstered in pale pink. The chair is cropped at the right edge of the canvas.

The mantle on the back wall is decorated with ivy and a tall vase with a red, white, and blue pattern. A portrait of George Washington in a gold military uniform hangs above it. It has an elaborate gilded frame, as do the two smaller paintings that hang behind Carter, flanking his shoulders. On the left is a bust-length portrait of Benjamin Franklin, and on the right, a landscape with a blue sky, most of which is hidden behind the President.

A rectangular niche with four shelves is set within the wall on the left side of the canvas. The bottom three shelves hold books, while the top is reserved for three blue and white plates. A decorative inset in the shape of a shell crowns the top of the niche. Below the niche is a small side table with chairs on either side. A bronze bust of president Harry S. Truman rests upon it.

When Americans elected Jimmy Carter in 1976, they were voting for a positive change in executive leadership. Burdened by escalating costs of living and tired of recent scandal-ridden politics, they saw Carter as a fresh new face who would make, in his words, government “as good as the American people.” A born-again Christian, Carter touted his human decency to heal the divisions of post-Vietnam American society while also promising to fix the economy. Stemming high inflation, however, proved to be harder than he had predicted. He also could not do much to ease the ongoing energy crisis instigated by the cartel of oil producing nations. In 1978, Carter successfully brokered a landmark peace accord between Egypt and Israel, but the Iranian hostage crisis of 1979, spurred by the U.S. support of the unpopular Shah of Iran, crippled the last year of his administration. He lost a reelection bid to Ronald Reagan in 1980.

In this portrait by Robert Templeton, Carter is shown standing in the oval office, as it was during his tenure. The donkey statuette on his desk was a gift from the Democratic National Committee.