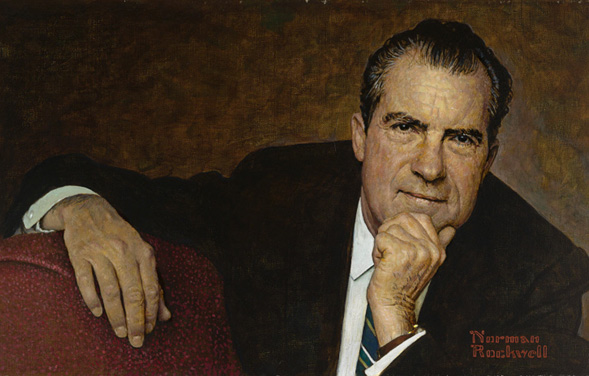 Norman Rockwell painted this small bust-length portrait in 1968, the year Richard Nixon won the presidential election. Shown from the chest up, with his head and shoulders almost filling the right half of the canvas, he is seated against a dark walnut background that fades to ashen brown toward the right. He stretches his arm over the upper portion of a maroon upholstered chair that fills the bottom left corner of the composition. Nixon leans forward and meets our gaze directly, which, coupled with the close vantage point, creates a sense of intimacy.

It is as if the newly elected president has just turned around in his armchair to face us. While the hand on the left rests lightly on the textured upholstery, which is flecked with small dots of apple red, he balls the hand on the right into a fist, and supports his chin on the outstretched thumb and forefinger. A direct light source illuminates his head and fist. Together, they form a strong vertical element on the right side of this otherwise dark, elongated horizontal composition.

Nixon tilts his head slightly to our right. He is so close to us that we can discern almost every detail of his expression, every wrinkle on his brow. Although his lips are closed, they turn up slightly at the edges. Smile lines etch his cheeks and ring his mouth. Above the bridge of his prominent nose, his thick dark eyebrows are slightly furrowed. They frame his bright eyes, and a shining glimmer of white at the center of each one reflects the light. His dark hair, which is gray at the temples, is combed back from his forehead. The hair at the center of his low, rounded widow’s peak is thinning.

Nixon wears a dark suit jacket that covers up most of his pristine white dress shirt and tie, which has diagonal navy, green, and turquoise stripes. With the outward and forward extension of his arms, the shoulder pads of his black blazer bunch up, forming creases in the material at the top of both his arms. Crisp white shirt cuffs peek out from the edges of his sleeves. On the left cuff, there is the pearlescent gleam of a small button or cufflink. The cuff on the right recedes to reveal the very edge of a gold watch face and its brown leather band. At the lower right, bold red block letters that spell out “Norman Rockwell” stand out against Nixon’s dark blazer.

Coming of political age during the Cold War, Richard Nixon used national security issues to gain prominence in Congress and later served as Eisenhower’s vice president. After he lost both the election for the presidency, in 1960, and the race for California governor, in 1962, it seemed as though his career may have peaked in the 1950s. However, as the Democratic Party unraveled over such topics as the Vietnam War and civil rights, Nixon won the presidency in 1968.

During his tenure, which was cut short, he focused on foreign policy, particularly with regard to ending the Vietnam War and establishing a relationship with China. The scandal over the Watergate break-in and the subsequent cover-up morphed into a crisis over presidential misconduct, and in 1974, he became the first—and so far the only—president to resign.

In 1968, Look magazine hired Norman Rockwell to portray the newly elected president. Admitting that Nixon’s appearance was troublesomely elusive, Rockwell chose to intentionally flatter him. If he was going to err in his portrayal, he said, he wanted it to be in the direction that would please his subject.

Norman Rockwell (1894–1978)
Oil on canvas, 1968
Donated to the people of the United States of America by the Richard Nixon Foundation