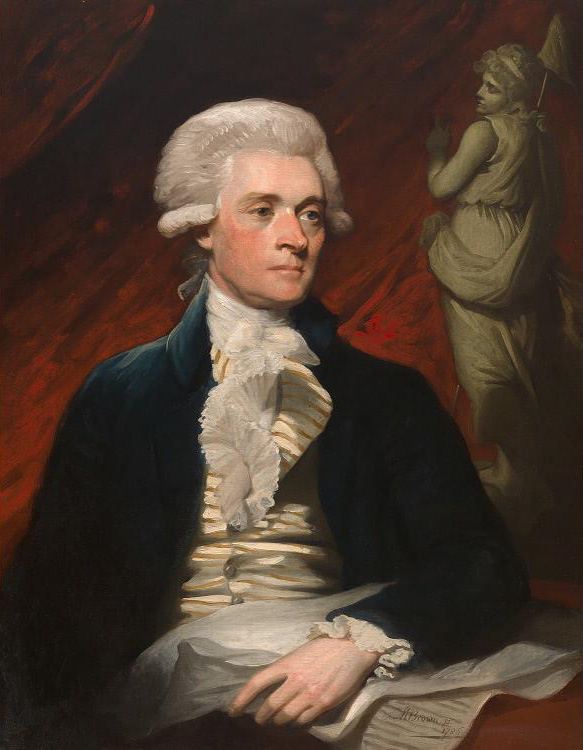 Mather Brown shows the third president from the waist up, seated at a table. He is handsomely dressed and grasps a large sheet of paper that lies on a table at the bottom right. Behind him to the right, a classical statue of a woman stands with her back to us. In the background, the folds of a burgundy drape create a strong diagonal at the top left and a deep shadow behind the president. A bright light streams in from the left, illuminating Jefferson’s light gray powdered hair and fair complexion, which makes him stand out dramatically against the dark curtain.

Jefferson turns his head to the right, but his torso faces us. His elaborate curled and powdered hair is brushed back at the forehead, curled at the sides, and tied at the back. The president looks to the right, as if lost in thought. Flecked with light, his large, deep-set hazel eyes are framed by light brown eyebrows. White highlights accent the bridge and tip of his prominent aquiline nose. Below it, his mouth is closed.

Jefferson is dressed in the manner of a stylish eighteenth-century gentleman. His jacket, which is mostly in shadow, is a deep peacock blue. At the point where the light hits the shoulder on the left, it appears almost white, suggesting soft velvet. Underneath the jacket, he wears a cream and gold striped waistcoat. Thick, unblended strokes of off-white indicate folds and convey the sheen of fine silk. A gauzy white fabric is wrapped around his neck and tied in a bow. Below it, an elaborate jabot, or ruffle, hangs from the top of his waistcoat, reaching almost half way down his chest. Made of a stiff, crimped sheer white material, it seems to extend out from his body and into our space.

On the left side of the painting, Jefferson’s arm is at his side and in shadow. He rests his other arm on a dark wood tabletop on the bottom right of the painting, and the ruffled edge of his sleeve emerges at his wrist. On the table is a long sheet of paper that has been folded over, partially obscuring the gray lines that indicate text. Its edges curl slightly, as if it were an unrolled scroll. Jefferson pulls the top of the sheet towards his middle, so that it almost blends in with his waistcoat. On the bottom of the sheet, the artist has signed and dated the painting: M. Brown, 1786.

In the background, the artist’s brushstrokes are looser, especially where the light falls on the scarlet drapery behind Jefferson’s shoulders. On the right, just over the president’s left shoulder, the statue of the woman stands with her body facing away from the viewer. Painted in warm gray tones, the left side of her body is in the light, while the rest is enveloped in shadow. She is wearing long robes and a flowing sash. Ringlets of hair spill from beneath her headband as she turns her head back toward Jefferson, as if to whisper in his ear. Her brow is furrowed and her lips pursed as she extends her index finger in a gesture that is almost lost in the dark. A pole topped with a liberty cap extends above her far shoulder to the uppermost right corner of the painting.

A scientist, an Enlightenment philosopher, and one of the most accomplished and complicated personalities in American history, Thomas Jefferson authored the Declaration of Independence and served his country as statesman, diplomat, and president. In 1803, during his first term as president, he orchestrated the Louisiana Purchase, which doubled the size of the United States and established the nation as a continental power. This expansion, more than any other, forced politicians to confront the growing slave economy, and Jefferson, who like many of the early American presidents held slaves, wrestled with the rift between his philosophical beliefs and the country’s dependence on slavery.

John Adams, who served as the American minister to England when Jefferson served as the American minister to France, hosted his friend in the spring of 1786, when both of them were more than a decade away from becoming president. During the visit, Adams suggested that Jefferson pose for the Boston-born artist Mather Brown, who created this portrait—the earliest known likeness of Jefferson.