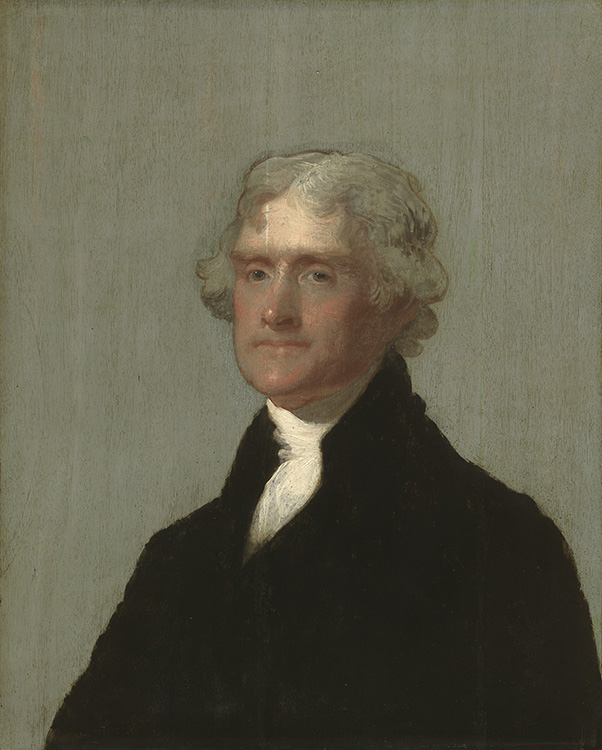 In this mid-size, bust-length portrait, Thomas Jefferson is angled slightly to our left, but turns his head halfway to look at us. When we first encounter the portrait from a several feet away, the president’s high-collared black jacket, the creamy white cravat at his neck, and the light falling upon his forehead stand out against the dusty sage background. The palette is limited, with black, white, gray-green, and brown as the predominant colors. Compared to some of the highly finished works in this exhibition, such the nearby “Lansdowne” portrait of George Washington, which is also by Gilbert Stuart, this painting has an unfinished, sketch-like quality.

When we move nearer to the painting, Stuart’s process and technique take center stage. He painted the background in vertical strokes of glistening, semi-opaque gray-green paint that rest atop the natural crevices of the mahogany panel. Stuart blocked in Jefferson’s head in a darker tone, then adjusted it, leaving evidence of his process in the form of a shadow along the top and left side of the forehead. The artist then painted Jefferson’s face and hair on top of the soft gray background, allowing some of it to show through to suggest a sense of shape and depth. Since the gray permeates the image and there are no sharp outlines, it seems as if the sitter is emerging from fog.

A semi-transparent mahogany brown line defines the contours of Jefferson’s trademark hairstyle, with its center part and the curled gray locks falling over his forehead and halfway over his ears. The right side of his face, which is in shadow, is rendered in a rich chestnut brown, as are the deep grooves beneath his brow bones.

With his closed mouth and heavily lidded eyes peering out from the shadows, Jefferson’s expression is neutral, if not reserved. Stuart therefore used light, texture, and color to tell us more about the sitter. He paid special attention to Jefferson’s brightly lit forehead, using denser paint and narrower strokes here than on the rest of the face. A pale peach zigzag articulates the right temple. From a distance, the president’s skin has a dull tan quality, but up close the vibrancy of the color is striking. Shades of coral infuse the president’s cheeks with a sense of vitality, while the exposed gray underpainting describes the circles underneath his eyes, the musculature around his mouth and set jaw, and the structure of his aquiline nose. The pure ebony of Jefferson’s pupils draws our attention back to his direct gaze, where tiny pinpricks of pure white paint indicate reflected light.

The opaque black of the president’s coat obscures the texture of the mahogany panel. It seems to lie atop the surface of the painting like a flat silhouette. Stuart went back over most of the edges with black liquid paint to create a smooth outline, but in the process made tiny splatters against the muted gray background. Overall, the artist strikes a balance between simplicity and detail, flatness and depth, and control and spontaneity.

Thomas Jefferson authored the Declaration of Independence, founded the University of Virginia, and wrote Virginia’s Statute for Religious Freedom. He was also a philosopher, inventor, gentleman farmer, and scientist. During his presidency, the nation bought a vast land holding west of the Mississippi River. Known as the Louisiana Purchase, this acquisition from France doubled the size of the United States and led to the remarkable findings of the Lewis and Clark Expedition (1804–1806). Although Jefferson once called slavery “an abominable crime,” he consistently enslaved African Americans, including his late wife Martha’s half-sister, Sally Hemings, with whom he had several children.

Known as the “Edgehill Portrait,” this painting on mahogany, by artist Gilbert Stuart, was the result of two sittings. Jefferson’s brightly lit forehead stands out against the muted gray-green background, as if to emphasize his bold intellect.