For the first time, a portrait of former President Barack Obama by Chuck Close (2013) will be displayed in the iconic exhibition “America’s Presidents” at the National Portrait Gallery. A temporary installation on view from March 24 is part of an extensive four-phase renovation of the nation’s only complete collection of presidential portraits outside the White House. These portraits will remain on view through Sept. 4 before moving back into the newly restored gallery spaces and reopening Sept. 22.

In addition, this exhibition will showcase “Hindsight Is Always 20/20” by contemporary artist Luke DuBois. DuBois has generated “word clouds” with words and phrases from the State of the Union Addresses of 41 presidents ending with George W. Bush. They are presented in order of most-frequent to least-frequent word in the form of an eye chart for each President. The result is a startlingly clear snapshot of the lexicon of each presidency, containing a mix of key words and rhetoric unique to the presidents and their times. The words amplify the story that the museum tells about the presidents by highlighting how the issues of the day became part of Americans’ political dialogue and vocabulary. The installation will allow visitors to marry words with images in a way that is both educational and aesthetically appealing.

The Smithsonian’s National Portrait Gallery tells the history of America through the individuals who have shaped its culture. Through the visual arts, performing arts and new media, the Portrait Gallery portrays poets and presidents, visionaries and villains, actors and activists whose lives tell the American story. 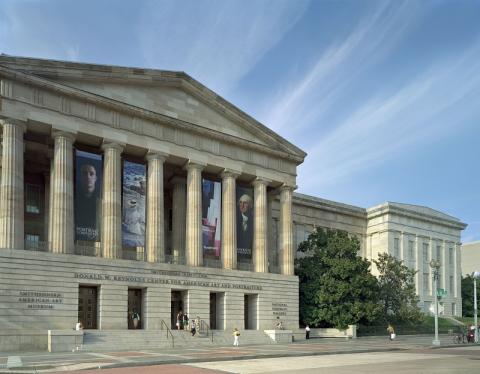