Portrait of Yarrow Mamout on View at the National Portrait Gallery

Pocahontas, Benjamin Franklin, Harriet Beecher Stowe, Frederick Douglass, Walt Whitman and hundreds more who may—or may not—have been highlighted in high school history lessons are featured in the Portrait Gallery’s permanent collection exhibition “American Origins.” This summer, as a part of the museum’s annual rotations, Yarrow Mamout’s portrait and story will be added to the space. Mamout, an African American Muslim man and former slave, was portrayed by James Alexander Simpson in 1822. The portrait will be installed July 19 and remain on view through August 2019.

“The Portrait Gallery has collaborated with the District of Columbia Library in Georgetown in order to pay tribute to an enslaved man who overcame great odds,” said Kim Sajet, director of the National Portrait Gallery. “His portrait reminds us that Muslims have been a part of the fabric of this nation since the beginning.”

Born in Guinea in West Africa, Mamout (c. 1736–1823) was enslaved at age 16. Accounts report that he was educated, as he could read and write in Arabic before his capture, and once he came to the U.S. he learned to speak English. In America, he was sold to Samuel Beall in Takoma Park, MD., and was later inherited by Beall’s son and brought to Georgetown.

Mamout was freed at age 60. He chose to remain in Georgetown, where he became known for his work as a brickmaker, basketweaver and more—a jack-of-all-trades. After saving his earnings and purchasing stock at the Columbia Bank of Georgetown, Mamout bought a property on Dent Place. In 2015, this property was excavated to learn more about Mamout’s history.

This portrait by Simpson is a respectful depiction of an African American Muslim man at a time when there were nearly 6,400 slaves in Washington. Free blacks were at constant risk of being jailed or sold into slavery if unable to prove their free status by showing a certificate. In the portrait, Mamout wears a hat that could be a kufi, traditionally worn by African Muslim men in recognition of their religion or African identity. Whereas many historical portraits show figures wearing Western attire, such as the museum’s portrait of Pocahontas, Simpson’s portrayal illustrates a rare instance in which a subject had the freedom to assert his cultural heritage.

This portrait is on loan from the District of Columbia Library, Peabody Room, Georgetown Branch. 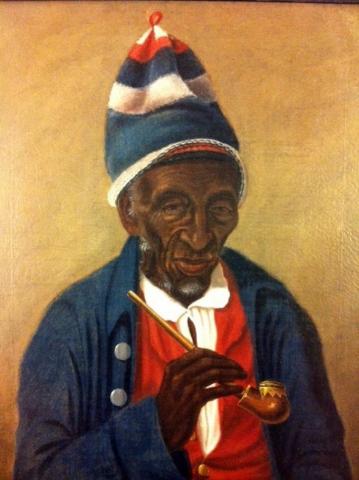 Yarrow Mamout by James Alexander Simpson.
Back to Top