This blogpost originally appeared on January 20, 2011

John F. Kennedy was inaugurated to the presidency 50 years ago today, January 20, 1961.

Near the end of one of our greatest Western films, John Ford’s The Man Who Shot Liberty Valance, we learn that the heroic story of the central character, played magnificently by James Stewart, is a myth—a myth that propelled him all the way to a Senate seat. When he is traveling to the real hero’s funeral, Stewart’s character tells a group of reporters the true story and then asks one if he’s going to print it. The reporter answers, “No sir, this is the West, sir. When the legend becomes fact, print the legend.”

The Camelot aura of the Kennedy administration was palpable to those of us who were around fifty years ago for the inauguration of this strikingly handsome young man and his beautiful wife and family. We had begun to tire of the previous president, Dwight Eisenhower, an older man from a different era. Notwithstanding his infectious smile and decisive role during World War II, he seemed to have lost touch, to be a passive president. We yearned for the young man—the first president born in the twentieth century, the youngest man elected to that office, and the second-youngest to serve—who would once again bring a sense of vigor to the presidency.

John Kennedy told us during the campaign that the Soviet Union was gaining ground on us militarily, that there was a “missile gap,” and that the country needed to get “moving again.” After he became president there seemed to be a flurry of activity: the dazzling Jacqueline Kennedy presided over glittering cultural events at the White House and younger men of sterling academic credentials took the place of older businessmen in the cabinet. Charm and sophistication had taken their place in the capital.

After the young president’s untimely death, only one thousand days into his first term, Kennedy’s men and a sympathetic media told us of his accomplishments: a restored economy and defense and, although not passed into law, administration bills on civil rights and poverty that, when passed under President Lyndon Johnson, changed the direction of the country.

We were told that, had he lived for a second term, Kennedy would have withdrawn our troops from Vietnam. Historians are not supposed to deal with counterfactual reality, so I won’t guess what Kennedy would have done. I will point out, however, that early in his presidency he had a disastrous summit meeting with Soviet Secretary Nikita Khrushchev in Vienna. Kennedy acknowledged that he had been unprepared for the meeting and intimidated by the Soviet leader. Then came Khrushchev’s construction of the Berlin Wall. Kennedy made a point of saying to his advisers that America would have to take a strong stand somewhere in the world against Communist aggression, specifically referring to Vietnam (where Ike had refused to send troops to support the French). Kennedy duly placed thousands of “advisers” in that land.

I will also point out that Kennedy’s bills on civil rights and government entitlement programs were hopelessly stalled in Congress while he was president. The “missile gap” was a myth—the older guy, Ike, knew that the Soviets had very few operational missiles (and had told Kennedy this in briefings). Eisenhower knew this because of the American U-2 spy plane flights over the Soviet Union, which he had personally directed and supervised; so much for a passive president!

One of the major reasons for the economic upturn in the Kennedy years was a large tax cut with big reductions for the upper brackets, angering many in the left wing of the Democratic Party, who began to view the president as his father’s son. (His father, Joseph Kennedy was a very successful businessman.) And finally, both John Kennedy and his brother Robert, who was appointed attorney general by the president, tried to discourage Martin Luther King’s March on Washington because they feared that it would make the United States susceptible to Soviet propaganda about America’s treatment of its “Negroes.”

This is a part of the “true story.” But then John Kennedy did inspire us to be better, to “bear any burden,” to “meet any hardship”: he created the Peace Corps and kindled excitement and pride in Kennedy’s space program, with its goal of putting a man on the moon by the end of the decade. Kennedy’s dazzling performances in his televised press conferences showed his sense of humor and quick, nimble mind.

My vivid memories recall an undeniable sense of renewal and pride in our young, intelligent president. Can we discount the sense of progress and well-being that Kennedy instilled in so many of us? And don’t nations and civilizations, like people, need that feeling of confidence? Those of us who are old enough to remember Kennedy will swear that Camelot was real, that if the young man had lived, America would have undergone a great renaissance. We do know now that Kennedy’s assassination on November 22, 1963, was the real start of the 1960s, a time of anguish, remorse, and great pangs of conscience for Americans. Ironically, it would be America’s oldest president, in the 1980s, who would restore America’s optimism and confidence lost on that sunny day in Dallas in 1963.

For me, when the question arises about which was the real Camelot, I say, “print the legend.” 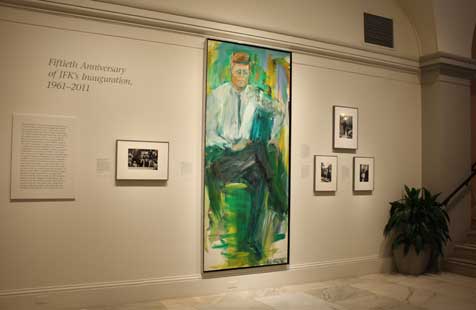