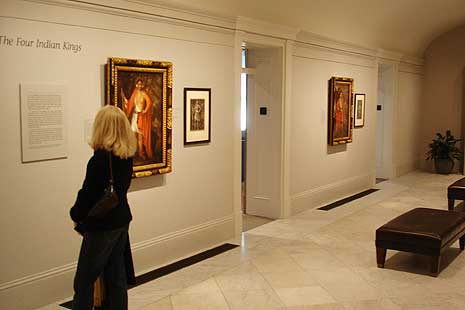 The exhibition “Four Indian Kings” is closing soon at the National Portrait Gallery, so see it while you can—the final day is Sunday, January 25. The paintings for this special installation were lent by the Portrait Gallery of Canada, a program of the Library and Archives of Canada.

In 1710, a delegation of four Native American leaders—three Mohawk from the Haudenosaunee (Iroquois) alliance and one Mohican from the Algonquin nations—traveled to the Court of Queen Anne in London. The delegation traveled to London with British military leaders seeking to court support against competing French and their allied Native interests in North America.

To commemorate the delegates’ visit, Queen Anne commissioned John Verelst, a Dutch portrait artist residing in London, to paint their official portraits. They are the earliest known surviving oil portraits from life of Native people of North America. So popular were the “Four Indian Kings” that printmaker John Simon created mezzotints after these paintings.

While the “Four Kings,” as they became known, were not the first Native visitors to Britain, their presence at Court and their interactions with Londoners, who treated them as celebrities, ignited the British imagination. Poems, ballads, and music were written about them.

The portraits of the “Four Indian Kings” function as a record of early cultural and political diplomacy between the Haudenosaunee and the British, demonstrating discourse, negotiation, and alliance. For more than a hundred years, the portraits were displayed at Court, where many visitors saw them. Subsequently, they were acquired by the Petre family in Essex, and in 1977 they were purchased by Canada with a special grant from the Canadian Government.

Verelst’s depiction of Haudenosaunee (Iroquois) symbolic skin markings, elaborately demonstrated by Mohawk Sa Ga Yeath Qua Pieth Tow (baptized Brant), is one of the best records of eighteenth-century Native tattooing in existence. The tattoos, visible on all four delegates, were first stenciled on the skin and then pricked into the flesh with trade needles or little bones until the blood flowed. While the precise significance of the markings remains unclear, Haudenosaunee men were tattooed to commemorate their achievements in battle.

The highly individualized depiction of these markings is an important aspect of the representation characteristic of this commemorative portrait. Sa Ga Yeath Qua Pieth Tow was the grandfather of venerated Mohawk leader Thayendanegea (Joseph Brant), a captain in the British military during the American Revolution.

Born in present-day upstate New York, Ho Nee Yeath Taw No Row (baptized John) was one of the Haudenosaunee (Iroquois) known as the "Four Indian Kings." The display of symbolic skin markings, distinctive clothing, and beautiful or unique items were all ways that Native diplomats demonstrated their values and status.

There is much discussion among ethnographers regarding the authenticity of the items represented in these paintings. For example, Ho Nee Yeath Taw No Row is depicted holding a bow that would be too small to have been used by an adult. The depiction of a wolf behind him represents his dodem, or clan affiliation. Dodem animals—wolf, bear, and turtle—included in each of the four portraits, mark the delegates’ connections to their community. Verelst likely spoke with each of the men, through their interpreter, to understand the importance of such symbols.

Verelst depicted the four representatives of the Haudenosaunee (Iroquois) alliance in a style reserved for royalty. Each full-length figure is posed in a stance associated with those wielding power, their gaze directed at the viewer. Mahican Etow Oh Koam (baptized Nicholas) wears or holds items that refer to his status, such as the carved wooden ball-headed club which identifies him as a warrior.

The beautiful thunderbirds tattooed across the side of his face make reference to an important spiritual support for a warrior. In many Native cultures, thunderbirds are powerful sky spirits that can evoke the terrors and dangers of the natural world. The dramatically draped red cloaks, edged in gold, may have been offered by a London costumer at the Queen’s request. In this way, Verelst portrayed the ambassadors in a format familiar to European viewers that indicated their social position both in European and Haudenosaunee terms of reference.

Presented as "kings" to the Royal Court in London, the four Haudenosaunee (Iroquois) carried the authority of diplomats. Mohawk leader Theyanoguin (baptized Hendrick) was given the epithet "Emperor of the Six Nations." While the four "kings" were represented both in European and Haudenosaunee terms, he is the only one almost fully depicted in English dress. He wears black because the Court was in mourning for the recent death of the Queen’s consort. His dress consists of a sleeved waistcoat, linen shirt, breeches, stockings, and buckled shoes, helping viewers identify his status as "Emperor."

The wampum belt that he holds is a deeply significant item that serves to commemorate the meeting and to represent an alliance that cannot be broken unless the belt is returned. Theyanoguin subsequently became a significant military leader and ambassador after his return to North America.

The next Face-to-Face talk is this Thursday, January 15, when Associate Curator of Photographs Frank Goodyear speaks about photographer Ryan McGinley’s self-portrait in the exhibition "Portraiture Now: Feature Photography."  The talk runs from 6:00 to 6:30 p.m.  Visitors meet the presenter in the museum’s F Street lobby and then walk to the appropriate gallery.