Q. What National Park Service memorial is most closely associated with Elvis Presley?
A. The U.S.S. Arizona Memorial at Pearl Harbor, Hawaii

On this day in 1935, Elvis Presley was born in Tupelo, Mississippi. Many stories about the King of Rock and Roll have taken on monumental and mythical status. Most everyone who has heard of Elvis has also heard the story about the King shooting the television set, the late-night exploits of the Memphis Mafia at Graceland, or Elvis flying from Memphis to Denver to pick up a fried peanut butter and banana sandwich. Most everyone also has seen the photos of Elvis and President Nixon, as well; that sequence of images has its own location on the “When Nixon Met Elvis” website by the National Archives.

Elvis was the prototype for ensuing generations of rock stars. His madnesses were many and his desire to apologize was minimal; after all, he was traveling in uncharted waters. Elvis established the pattern, and fast cars, beautiful women, and fistfuls of narcotics would quickly become part of the rock and roll milieu.

Wild behavior aside, one aspect of Elvis’s personality—though out of control at times—continues to endear him to millions worldwide: he was a charitable man. For every story about the King blowing apart a television set, there are dozens of stories of Elvis helping a friend in need or buying a car for a total stranger.

In Fortunate Son: The Life of Elvis Presley, biographer Charles Ponce de Leon writes, “Always one to share his wealth, Elvis . . . became impetuously generous toward his family, friends, and business acquaintances—sometimes even perfect strangers. He bought them custom-made rings, necklaces, bracelets, and pendants. His jewelry purchases became so frequent and extravagant that his favorite Memphis jewelers were happy to fly to Las Vegas or wherever he was to take an order or make a special delivery.”

One of Elvis’s acts of benevolence will continue to benefit millions forever.  In March 1961, Elvis gave a concert in Hawaii for the benefit of the U.S.S. Arizona Memorial fund. The association had struggled for years to fund the completion of the memorial at Pearl Harbor, but the end was not in sight. United States Park Service records indicate that Elvis’s charity performance at Bloch Arena in Hawaii yielded almost $55,000 toward funding the monument; the entire memorial cost approximately $516,000, meaning that the concert produced more than 10 percent of the money needed for the project.

Interestingly, without Elvis, there is no way of knowing when the U.S.S. Arizona Memorial would have opened to the public. His 1961 benefit performance was the final fiscal push needed to open the doors to the memorial.

The next Face-to-Face talk is tonight (Thursday, January 8), when Anne Goodyear, Assistant Curator of Prints and Drawings, will discuss a portrait of Cindy Sherman by photographer Martin Schoeller. This portrait is on view in the exhibition "Portraiture Now: Feature Photography." The talk runs from 6:00 to 6:30 p.m. Visitors meet the presenter in the museum’s F Street lobby and then walk to the appropriate gallery. 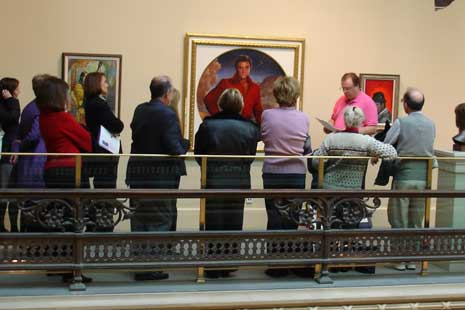