Gertrude Stein rings bells, loves baskets, and wears handsome waistcoats. She has a tenderness for green glass, and buttons have a tenderness for her. In the matter of fans you can only compare her with a motion-picture star in Hollywood, and three generations of young writers have sat at her feet. She has influenced without coddling them. In her own time, she is a legend in her own country. . . . Keys to sacred doors have been presented to her, and she understands how to open them. She writes books for children, plays for actors, and librettos for operas. Each one of them is one. For her a rose is a rose and how!

Gradually I told my father that perhaps I would leave San Francisco. He was not disturbed by this, after all there was at that time a great deal of going and coming and there were many friends of mine going. Within a year I also had gone and I had come to Paris. There . . . I met Gertrude Stein. I was impressed by the coral brooch she wore and by her voice. I may say the only three times in my life have I met a genius and each time a bell within me rang and I was not mistaken, and I may say in each case it was before there was any general recognition of the quality of genius in them. The three geniuses of whom I wish to speak are Gertrude Stein, Pablo Picasso, and Alfred Whitehead. I have met many important people, I have met several great people but I have only known three first class geniuses and in each case on sight within me something rang. In no one of the three cases have I been mistaken. In this way my new full life began.

From The Autobiography of Alice B. Toklas by Gertrude Stein, 1932

American expatriate writer Gertrude Stein was a high priestess of early-twentieth-century modernism for the many who visited her fabled Paris apartment. She collected and promoted the art of the avant-garde, including that of Picasso and Matisse, and her own abstract, repetitive prose inspired the experiments of playwrights, composers, poets, and painters.

"There was an eternal quality about her," sculptor Jo Davidson wrote. "She somehow symbolized wisdom." He chose to depict her here as "a sort of modern Buddha." Delighted by the sculpture, Stein composed one of her famous prose portraits of Davidson, later published in Vanity Fair alongside a photograph of this work.

Davidson’s sculpture of Gertrude Stein is on view at the National Portrait Gallery in the exhibition “Twentieth Century Americans” on the museum’s third floor. 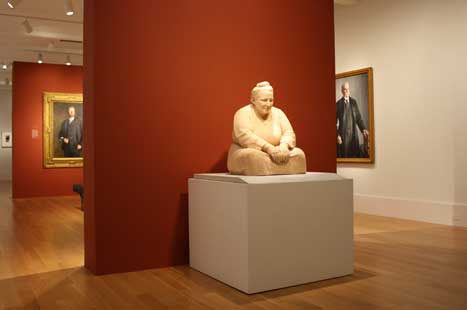