Screen legend Katharine Hepburn fashioned herself into a cultural icon by sheer will and a shrewd business sense. She won the first of her record four Best Actress Oscars in 1933 for Morning Glory and made several popular films in the mid-1930s. But her subsequent choices like Christopher Strong and Sylvia Scarlett baffled her audience, and by 1938 she was branded “box office poison.” Even such screwball comedies as Bringing Up Baby (1938) failed to renew her popularity, and it wasn't until The Philadelphia Story (1940) that she was back on top.

Hepburn partnered in nine films with Spencer Tracy, winning an Oscar for Guess Who's Coming to Dinner. She also won Oscars for The Lion in Winter and On Golden Pond. She received a Kennedy Center Honors award in 1990.

In 2009, the National Portrait Gallery acquired Hepburn’s four Oscar statuettes as a gift from the Katharine Hepburn estate. They are now on view in the “Twentieth-Century Americans” gallery on the museum’s third floor, next to a 1982 portrait of Hepburn by artist Everett Raymond Kinstler, which she termed her “favorite.”

Learn more about Hepburn by visiting the online exhibition for "KATE: A Centennial Celebration.” This exhibition was on view at the National Portrait Gallery from November 2, 2007, to September 28, 2008.

Face-to-Face occurs every Thursday evening at the National Portrait Gallery. The next talk is March 18, when Rayna Green, curator at the National Museum of American History, speaks about Julia Child. The talk runs from 6:00 to 6:30 p.m. Visitors meet the presenter in the museum’s F Street lobby and then walk to the appropriate gallery. 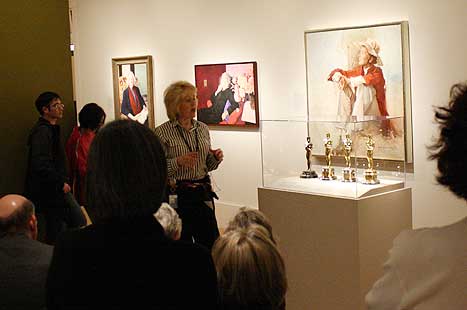