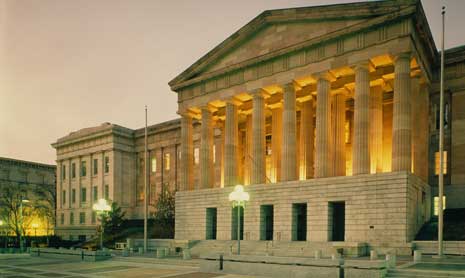 Forty years ago today, the National Portrait Gallery opened its doors to the public.

A national portrait gallery was an idea long in search of a building. At last in 1958 came the promise of a home in the majestic Old Patent Office (saved from being replaced by a parking facility) once it was vacated by the Civil Service Commission. Legislation formally brought the National Portrait Gallery into being in 1962 and after frustrating delays, it opened its doors to the public on October 7, 1968. “The Gallery will tell for centuries to come the story of American history,” the welcoming proclamation from the District of Columbia affirmed, “by displaying the likenesses of these men and women of all stations of life and of diverse origins.” You can learn more about the history of the Old Patent Office Building in NPG's online exhibition "Temple of Invention: History of a National Landmark."

“After a long, hazardous pilgrimage,“ wrote Charles Nagel, the Gallery’s first director, in the initial  catalog, “we have finally come to our premier exhibition.”  Entitled "This New Man A Discourse in Portraits," the exhibition's theme was intended to be an inquiry into the nature of the American national character. The one hundred and sixty eight paintings, sculptures, and photographs were arranged, not chronologically, but in “thought-provoking juxtapositions” which sometimes  “made for strange bedfellows.”

Only thirty-five of the portraits were from the Gallery’s own small collection—the remainder were on loan from individuals and institutions throughout the country and abroad. Explained Nagel, “We’re trying to give an idea of what we’re aiming at, not of what we have.” (A fair number of the borrowed  portraits would find their way,  by gift or purchase, into the Gallery’s permanent collection. )

In addition to “This New Man” the Gallery assembled an impressive array portraits of all past presidents of the United States—no easy task since the collection included likenesses of only 23 of the 39 men who had held the office. The prize, hung to greet guests as they ascended the stairway to the second floor, was the Gilbert Stuart Lansdowne portrait of George Washington lent by Lord Primrose. The loan request had initially been turned down, but the portrait was secured after Smithsonian Secretary Dillon Ripley asked Lord Mountbatten (with whom he had worked in South East Asia during the World War II) to intervene. (The Donald W. Reynolds Foundation made it possible for the Gallery to purchase the Lansdowne in 2001.)

Not on view was the Peter Hurd portrait of the current president, Lyndon Baines Johnson, who had denounced it as “the ugliest thing he had ever seen.” Johnson, miffed because the portrait rejected by the White House, had been accepted by the Portrait Gallery as a gift from the artist, had declined an invitation to speak at the opening ceremonies and declared that he wished no likeness of himself to be on view during his term in office.  The special alcove intended for the portrait of the incumbent president was filled instead by his immediate predecessor, John F. Kennedy.

“'This New Man' brings together some truly superb examples of the art of portraiture,” wrote the New York Times art critic, Hilton Kramer, “along with some of the most deplorable pictorial junk ever put on public display.”  The “truly appalling thing,” noted another scribe, was the diorama based on John Trumbull’s “The Signing of the Declaration of Independence” which looked like “handmade Barbie dolls.” (As one of his first acts, the Gallery’s second director, Marvin Sadik, took the Gallery’s one and only diorama off view.)

That the Portrait Gallery received mixed reviews at its opening, is attributable in part to a misunderstanding of what this new breed of museum was about–it was not a gallery of art as such–although the role of the artist is part of the Gallery’s mission—but rather a place of history where the significance of the sitter—for good or for evil–takes precedence over artistic merit. That the Portrait Gallery, which Charles Nagel and many others thought had been founded one hundred years too late, has been able, over the past forty years, to acquire a collection of images worthy in both history and art, is downright amazing.

The National Portrait Gallery is part of theDonald W. Reynolds Center, along with the Smithsonian American Art Museum.