"...For the People": The Presidential Portraits at the National Portrait Gallery 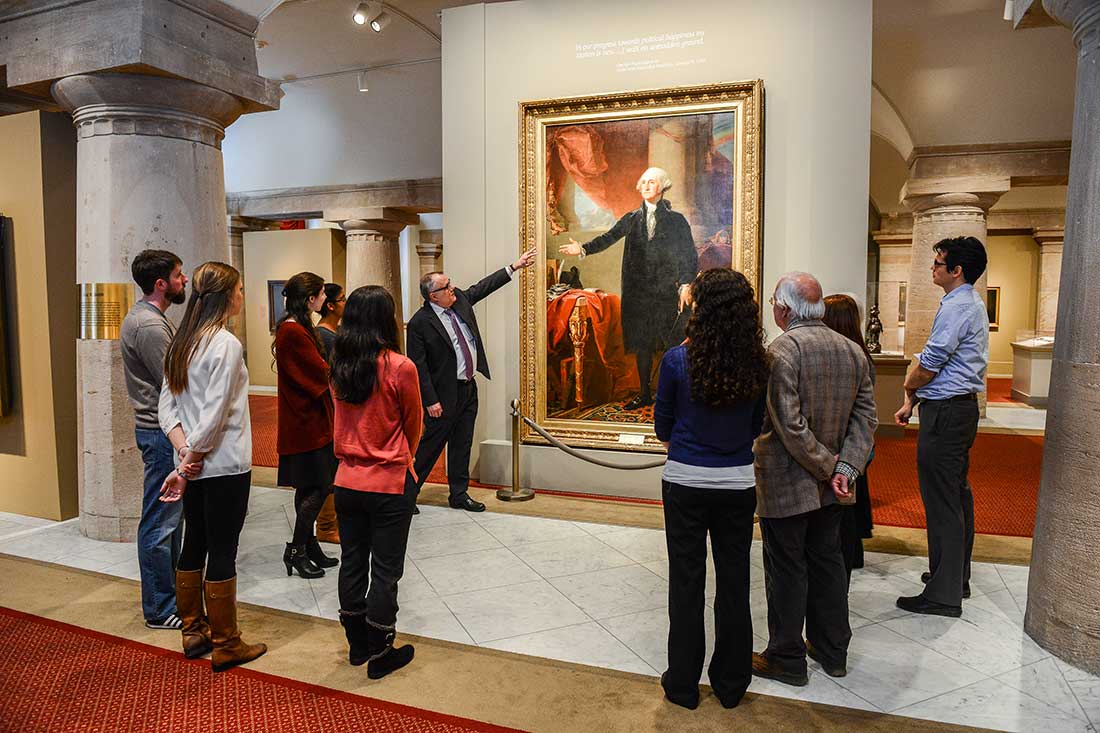 Along with the White House itself, the National Portrait Gallery has the only other collection of all the presidents' portraits. It is one of the hallmarks of our collection and is the centerpiece of the museum, housed in the historic Old Patent Office in downtown Washington, DC. The Portrait Gallery has a specific congressional charter to recognize the people who have made a significant contribution to America’s history and culture – it is unarguable that the president, even (or perhaps especially!) the bad ones, impact our history in many different ways. Moreover, recognizing the presidents through fine art portraiture is a way not only to honor them as individuals but a way to visually represent the history of American democracy. Many countries have presidents now: but only one did in 1792 when Washington was elected to that office. The history of the presidency is a history of the rise and expansion of democracy both at home and internationally.

The process by which the Portrait Gallery acquires presidential portraits is an interesting one. A relatively young institution as things go – we will celebrate our 50th anniversary in 2018 – many of our presidential images were acquired initially in a rather accidental way: through auction, purchases, gifts, wills and estate sales. Presidential pique even played a role in our acquisitions as when Lyndon Johnson refused to display the portrait done of him by artist Peter Hurd at the White House, banishing it to the Smithsonian; we are glad to have it!

The museum only began to receive an official commissioned portrait of the sitting president in 1962. These official portraits are a major production for both the museum and the White House. We work in consultation with White House staff to provide guidance about potential artists and the process of taking a portrait but the choice is up to the president and, now, the first lady, whose portraits we have also now started to collect. Official portraits are interesting beasts because they are, of course official: they signify the status and attainments of the person portrayed. But they also are deeply personal, even revelatory, portrayals that say something of the character of the man or woman who shows their face to the public. The style of the portrait – the pose, the colors, the setting, as well as facial features (in the 19th century stern and forbidding was definitely the default expression) – all convey a measure of the sitter.

In addition to the official portrait displayed in our American Presidents’ gallery, we also collect other images of the presidents in order to fully flesh out their careers as well as the history of the time. There has always been an appetite for images of the president, even before photography and the video age. Not surprisingly, George Washington is by far the most well-represented president with 144 images ranging from his time as general of the Continental army to popular prints distributed during his presidency and commemorations made after his death. The most iconic image—and the signature image of our gallery of presidential portraits -- is the Lansdowne Portrait painted by Gilbert Stuart in 1796; it was commissioned for a British aristocrat who admired the elected leader of the New Republic. The artist deliberately depicted Washington as a civilian leader dressed in a somber black suit surrounded by symbols of American democracy such as an embedded flag in the frame of his chair to the Constitution and Laws of the United States at his feet. There is also a rainbow as a harbinger of good fortune and the winds of democratic change ruffle the curtains in the neoclassical space in which Washington stands. In addition to the Lansdowne we are able to display other major images of Washington by the significant artists of the time, including Charles Willson Peale and his family.

Overall, the National Portrait Gallery has over 1600 presidential portraits in its collection in media including large scale oil paintings, prints and drawings, and photographs. As with Washington, the most influential and prominent presidents, such as Abraham Lincoln, who was the first president to be comprehensively photographed and used photography as a governing tool, or Theodore Roosevelt, who used photography and movies to document his time in office, have extensive holdings in our collection. The visual record is evidence of their importance. Contrastingly, for some presidents we have relatively few images: in many cases, particularly in the nineteenth century, images may simply not exist. Moreover, images might not have been available to us to collect as they are in private hands or in other museums.

It’s a good thing to remember that just because someone is famous it doesn’t mean that there are suitable portraits of them. Conversely, in our modern media age, including now the internet, the problem is not too few images but too many. And here is the here is the wrinkle that gives the Portrait Gallery its distinction and importance in the public culture: we are a museum of historical biography but we are also an art museum. We interpret the past through the intersection of history with art history and are mindful of the formal traditions and characteristics of how likenesses are made by the artists of the time.

We are responsible to this visual culture as well as to the political culture that produces each successive president. Styles change in both art and politics and the culture. Portraits are a unique opportunity to show the intersection of the personal with the political through the chosen medium of the artists. So not only do the historians and curators on our staff have to be able to contextualize the events of the time, they have to show how the portrait was a product of that time as well. For official portraits, certainly, but also for other major works, especially oil paintings, we want to collect works in which the artist and president met: the portrait from life. At the least, the artist needs to be a contemporary of the president – we do not now take into our collection, for instance, a modern re-imagining of George Washington or Abraham Lincoln. 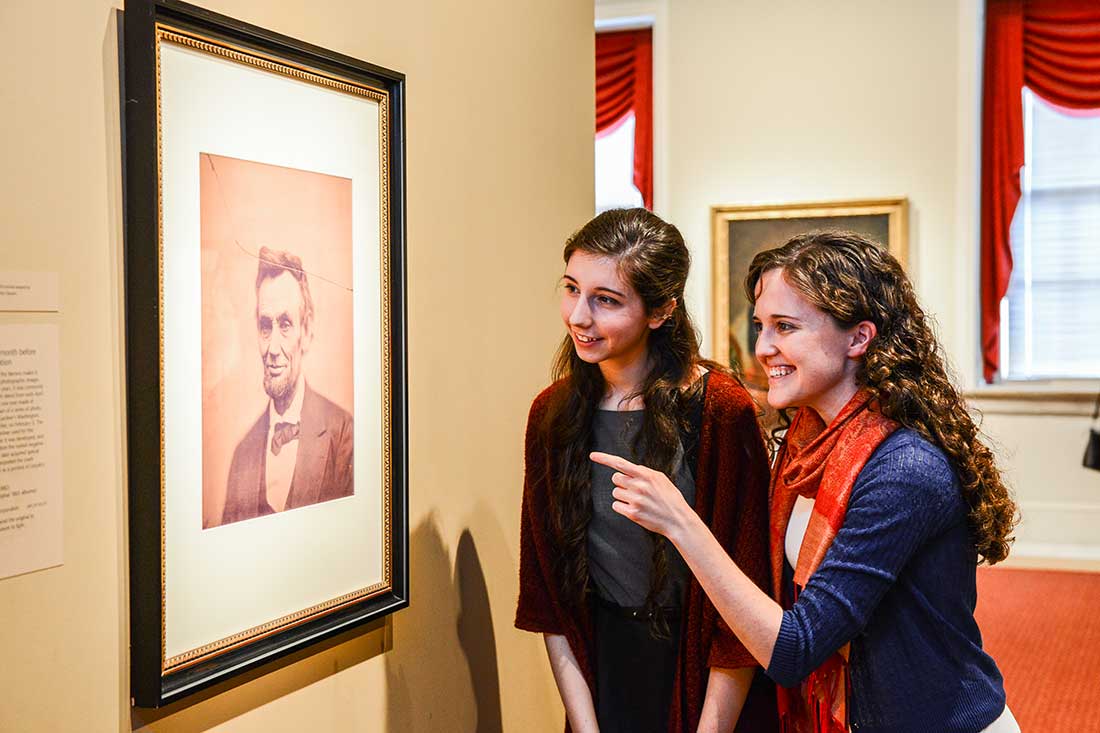 Since we are a history museum, we do trace how an image becomes disseminated across the culture. For instance, how an oil painting becomes a print in multiple editions and is then reproduced in the newspapers or magazines. But we are not a museum of popular culture: we do not collect every image in every format of the presidents (or of anyone else in our collection, for that matter). Nor do we collect every image that comes before us. Instead there is a process of assessment in which the accumulated knowledge of the Portrait Gallery’s staff is brought into play to assess the pictorial qualities and historical significance of the work of art. While we do consider hundreds of portraits each year in order to expand our collection, we take only a small fraction of that number into our holdings. Quality does count as does originality or singularity: we do not collect mass produced commercial images, for instance.

Aside from questions of technique and skill, above all, we desire images that are portraits first and which concentrate on creating a likeness of the sitter instead of fulfilling some other purpose.  Accuracy, allowing always for artistic license! is important but so also is obtaining an image that speaks to the character and nature of the individual. The likeness is the end result of the portrait and we are careful to avoid portraits becoming the means to another purpose, one which uses visual clichés to trigger a political or cultural response like a piece of propaganda.  While there are political symbols in the Lansdowne Washington, for instance, the artist only used them to contextualize the image of the first president. The point is that a portrait is the expression of an artist’s skill in creating an object that says something singular and unique about the person portrayed. A portrait is a frozen moment: an image that encapsulates the complex inter-relationship of two people – artist and sitter – at the same time.

Art in America has always been regarded with some suspicion as an elitist or even antidemocratic past-time, one for the privileged but which does not speak to the majority of our people. Nothing could be farther from the truth, especially with regard to portraiture. Portraiture, by depicting a life, is THE most accessible art form: we can all connect with it through our own lives. Through a portrait we can “see” the past through the eyes of another from another time. At the Portrait Gallery what you can see is the lived experience of American democracy through the images of the men and women who created this nation.