In this blog post, we focus on Tim Conlon and Dave Hupp, local graffiti artists who created four large murals that line the exhibition’s main hallway. These panels, with their sophisticated lettering style and color combinations, transformed the gallery space, bringing the beats and energy of hip hop to the museum’s walls.

Using the tags “CON” and “AREK,” Tim Conlon and Dave Hupp began writing together in 2000. Conlon brought a flair for figures to their collaborations, and Hupp excelled at quick, complex lettering. Since graffiti is performed without a public audience, a writer’s pseudonym, or “tag,” is the face he presents to the world—his self-portrait. In their artist statement, Hupp and Conlon write that graffiti is “a lifestyle, an addiction, a dysfunctional marriage of secrecy and fame, for better and for worse. Some see it as an insatiable appetite for destruction, but through this abstracted topography we find our creative vision and achieve our self-expression.”

In January of 2007, before the opening of “RECOGNIZE!” NPG web developer Benjamin Bloom sat down with Tim Conlon and Dave Hupp, and asked them a few questions. You can listen to the complete interview, and see their graffiti murals here. 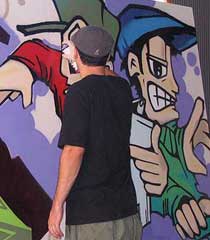 BB: What makes your style your own, or differentiates it from other people?

Tim Conlon (shown above): I think, just of course, the letters—the name that you choose that’s going to separate you from anyone else. I guess style-wise, my style pretty much reflects mostly New York straight-letter style, or straight-letter wild-style. You know something that’s bar-letters, very readable, you can tell what it says—probably has a little Baltimore influence to it.

And there is some West Coast stuff that I’ve added to it, when I lived out in L.A. for a while. Some little tidbits and painting techniques I do, that I remember from out there. I’d say it’s pretty generic, but I’ve painted enough over the years so that people recognize it. Even if they just glance at it, they probably know it’s me before they read the letters. Same probably goes for Dave too. 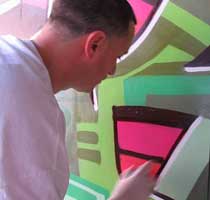 Dave Hupp (above): It’s just changed over the years. I don’t do a lot of connections. A lot of single-letter, bar-style—I want it to be readable. When it flies by I want Joe truck driver to be able to read it. You know, the average person. I don’t want it to be some wild crazy stuff that you can’t read. So usually each letter is separate. There maybe some simple connections, but just real bold bar-style letters.

BB: How do you feel about graffiti being in a museum?

DH: Well I’m glad to be alive and be in the Smithsonian. Because I guess not too long ago, you had to be dead to be in the Portrait Gallery, right?

DH: So to be alive and be in it is good! It’s a sign of the times. Some people may say “hey you’re a sell-out.” I look at it like being a musician, and never making an album or putting a CD out. Why are you strumming on that guitar for twenty years, if you can’t make a buck, or be seen, or be heard? And this is a way to be seen and be heard. This is huge—I guess when I walk down that marble floor and through the pillars and see these huge panels affixed to the wall, I’ll be like “damn, that’s our stuff.”