Sure, there have been some handsome men to hold the office of chief executive, but who was the best looking presidential heartthrob of them all?  Was it the movie star Ronald Reagan?  How about the youthful John Kennedy, or perhaps the well-coiffed James Buchanan?  According to one legend, the most obscure president of them all was one of the most handsome men of his age.

Is it true that Queen Victoria said that Millard Fillmore was the most handsome man she had ever seen?

"That statement is disputed," says Marie Schnurr, one of the curators at the Millard Fillmore House Museum in East Aurora, New York, but she adds, "He was considered a very handsome man."  Schnurr also states that President Fillmore was a very serious man, "very impressive, very dignified-- he took his responsibilities very seriously."

At the beginning of his administration, Millard Fillmore bestowed his presidential blessing on the Compromise of 1850—Senator Henry Clay's proposal to unite the North and the slaveholding South. The ensuing harmony, however, was short-lived. Among the compromise's concessions to the South was the new Fugitive Slave Law, which facilitated the capture of runaway slaves, and Fillmore was determined to enforce it. As northern abolitionists sought to undermine enforcement, tempers on both sides of the issue flared again. The sectional bitterness made a future rupture over slavery all but certain.

Fillmore's portrait by an unidentified artist dates to about the time he retired from the House of Representatives in the early 1840s. In the years following, he devoted himself to reconciling the growing differences among fellow Whigs in his native New York State. 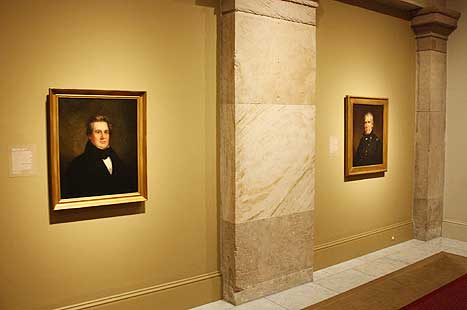