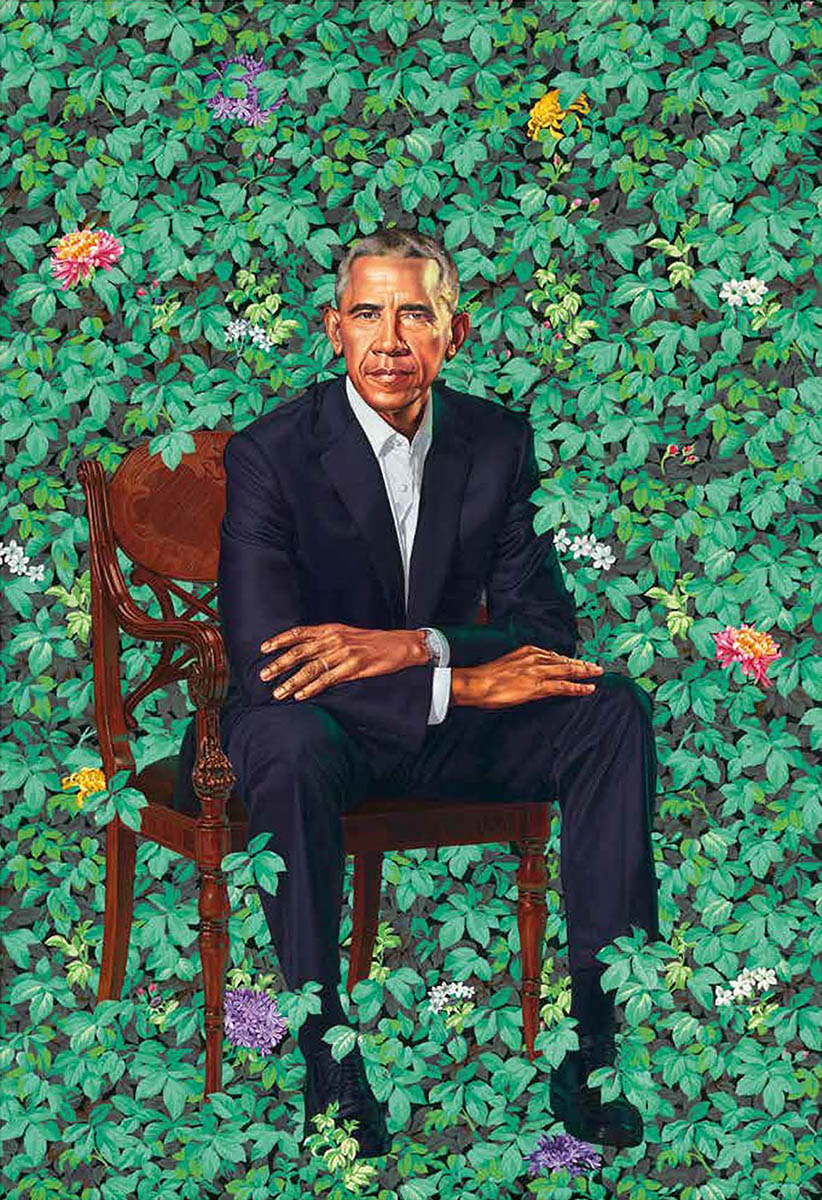 Barack Obama made history in 2009 by becoming the first African American president of the United States. The former Illinois state senator’s election signaled a feeling of hope for the future even as the U.S. was undergoing its worst financial crisis since the Great Depression. While working to improve the economy, Obama enacted the Affordable Care Act, extending health benefits to millions of previously uninsured Americans. Overseas, he oversaw the drawdown of American troops in the Middle East—a force reduction that was controversially replaced with an expansion of drone and aviation strikes. Though his mission to kill Al-Qaeda founder Osama bin Laden was successful, his pledge to close the Guantanamo prison went unrealized. Obama grew up in Hawaii, where he was one of only three black students at the Punahou School. As a student, he became aware of what it meant to be African American—a realization he later brought with him to the White House. After high school, Obama studied at Occidental College (Los Angeles) and graduated from Columbia University (New York City), where he earned a degree in political science in 1983. After working in the business sector for two years, he moved to Chicago, where he ultimately met his wife, Michelle Robinson. In Chicago, he worked in the impoverished South Side as a community organizer for low-income residents in the Roseland and the Altgeld Gardens communities. Obama entered Harvard Law School in 1988, graduating magna cum laude in 1991. While at Harvard, he was elected the first African American editor of the Harvard Law Review. After law school, Obama returned to Chicago to practice as a civil rights lawyer with the firm of Miner, Barnhill & Galland. He also taught constitutional law part-time at the University of Chicago Law School between 1992 and 2004—first as a lecturer and then as a professor—and helped organize voter registration drives during Bill Clinton’s 1992 presidential campaign. Obama’s advocacy work led him to run for a seat in the Illinois State Senate, where he won the election as a Democrat in 1996. During his years as a state senator, Obama worked with both Democrats and Republicans to draft legislation on ethics, as well as expand health care services and early childhood education programs for the poor. In 2004, he joined the United States Senate after winning the largest electoral victory in Illinois history. With this win, Obama became only the third African American elected to the U.S. Senate since Reconstruction.

By placing contemporary figures in the guise of powerful historic figures, such as Napoleon or John D. Rockefeller, Kehinde Wiley applies the conventions of glorification, history, wealth, and prestige found in art historical portraiture to urban, contemporary black and brown male subjects. Without shying away from potentially complicated socio-political histories, Wiley’s figurative paintings and sculptures reference historical sources and position young black men within the field of power. Wiley’s larger than life figures often blur the boundaries between traditional and contemporary methods of representation. President Obama said at the portrait unveiling: “What I was always struck by whenever I saw [Wiley’s] portraits was the degree to which they challenged our conventional views of power and privilege and the way that he would take extraordinary care and precision and vision in recognizing the beauty and the grace and the dignity of people who are so often invisible in our lives and put them on a grand stage, on a grand scale, and force us to look and see them in ways that so often they were not.”

This near life-size portrait celebrates Barack Obama, the 44th president of the United States of America. The former president is shown surrounded by nature and symbolic flowers that reflect both his personal and professional history. The chrysanthemums, for example, reference the official flower of Chicago. The jasmine evokes Hawaii, where he spent the majority of his childhood, and the African blue lilies stand in for his late Kenyan father. The vibrant colors and casual pose of the portrait are decidedly modern, placing him firmly in the present day. Rather than appropriate a past portrait and paint Obama in that individual’s position, as he typically does, Wiley and Obama together decided that this composition should be “wholly new,” reflecting Obama’s singular position in history. While the painting does have echoes of past presidential portraiture, such as the National Portrait Gallery’s seated portrait of Abraham Lincoln, it is not a direct reference.

• Consider the background. How does this background relate to past landscape and/or portraiture traditions? What might this tell us about President Obama’s character and his leadership style?

• Describe Kehinde Wiley’s use of color. How does he use color to create dimension in this composition? How does color establish a mood or tone in the portrait?

• Describe President Obama’s clothing. How does his clothing define both his past role as president and his future/current role as civilian?

• Consider President Obama’s facial expression and pose. What is he doing? • How does President Obama’s portrait compare to past presidential portraiture? (Consider gaze, pose, setting, clothing, color, and objects.)

• Consider the artist’s use of scale. How does the scale of the painting influence our understanding of President Obama’s relative importance as a leader?

• How does the portrait express President Obama’s individuality?

• How does the portrait relate to past portraiture traditions, such as the Grand Manner tradition, and why might the artist reference these traditions?

• President Obama was the first African American president of the United States. “How” he is represented and “who” painted his portrait are important considerations. Why? How does Barack Obama stand for more than just himself through this portrait?

• President Obama’s 2008 campaign slogan repeated the words “hope” and “change.” Working in small groups, create hope and change posters based on issues or individuals that are important to you.

• In 2009, President Obama won the Nobel Peace Prize for his diplomacy efforts. Writing from his perspective, draft an acceptance speech explaining what diplomacy is and why diplomacy is important. Use persuasive language.

• President Obama was the first African American president of the United States. Think of other famous firsts accomplished by Americans and create portraits of these individuals in the style of Kehinde Wiley.

• President Obama has been very vocal about his multi-racial heritage, which is referenced in this portrait through the various flowers painted by Kehinde Wiley. Consider your personal heritage. Create a portrait collage using visual symbols representing your family’s background.

• In his farewell address as president, President Obama declared: “Understand, democracy does not require uniformity. Our founders quarreled and compromised, and expected us to do the same. But they knew that democracy does require a basic sense of solidarity—the idea that for all our outward differences, we are all in this together; that we rise or fall as one.” Consider two of our past presidents together and create a Venn diagram or craft a comparative essay detailing their similarities and differences. Consider why it is important to find common ground, even when you disagree about something.

The National Portrait Gallery’s America’s Presidents exhibition lies at the very heart of the museum’s mission to tell the American story through individuals who have shaped the country. It showcases images of the past forty-four U.S. presidents, starting with George Washington and concluding with Barack Obama. Six presidents are given expanded attention because of their significant impact on the office: George Washington, Andrew Jackson, Abraham Lincoln, Theodore Roosevelt, Franklin D. Roosevelt, and Ronald Reagan. Over the past five decades, each of the National Portrait Gallery’s directors has made acquiring presidential images a priority, and consequently, the museum currently holds over 1,600 portraits of U.S. presidents in a variety of media. Beginning with President George H. W. Bush, the National Portrait Gallery initiated a process by which the museum would commission a portrait of each president, and beginning with First Lady Hillary Rodham Clinton, this process expanded to include a commissioned portrait of the first spouse. The Portrait Gallery works closely with the White House to suggest the artists for these artworks and to obtain various approvals. Usually, the portraits are created at the end of the president’s final term in office. All are privately funded and are owned by the National Portrait Gallery. The Portrait Gallery hopes to continue this initiative to ensure that the museum acquires formal portraits of every American president and first spouse for its permanent collection.