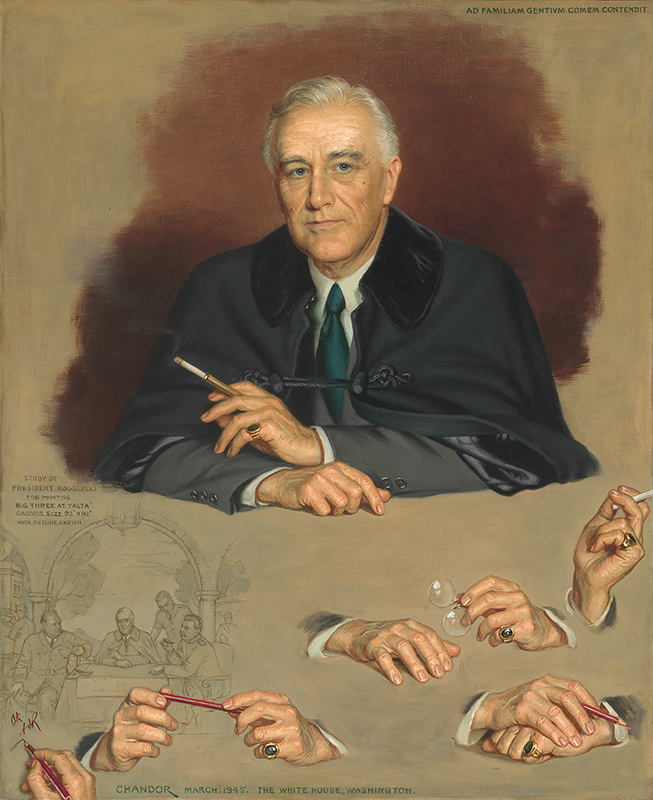 When Franklin Roosevelt began serving in New York’s state legislature in 1911, some observers declared him ill-suited for the rough realities of politics. But Roosevelt thrived on those realities; two decades later, he was advancing from the New York governorship to the presidency.

Taking office against the bleak backdrop of the Great Depression, Roosevelt responded quickly to this economic disaster with a host of regulatory and welfare measures that redefined the government's role in American life. Among conservatives, the new federal involvement in matters traditionally left to the private sector was a betrayal of America’s ideals. But in other quarters, Roosevelt’s activism inspired an unwavering popularity that led to his election to an unprecedented four terms.

During the autumn of 1944, Roosevelt received a letter from artist Douglas Chandor, proposing that a painting be created of Roosevelt, Winston Churchill, and Joseph Stalin, to document the allied efforts at the Yalta Conference in Russia. Chandor arranged a sitting for Roosevelt in early April, less than a month before the president’s passing. This portrait is a study for the larger painting, The Big Three at Yalta,—a sketch of which appears at the lower left Chandor also painted a life portrait of Churchill, which is owned by the National Portrait Gallery, but Stalin would not sit for his portrait. Thus, The Big Three at Yalta was never painted.

Chandor believed that hands revealed as much of a person’s spirit as his or her face would, and therefore experimented with multiple configurations and gestures, scattered across the bottom of the canvas. Roosevelt, however, was dismayed by the attention Chandor paid to his hands, dismissing them as “unremarkable” and likening them to “those of a farmer.”