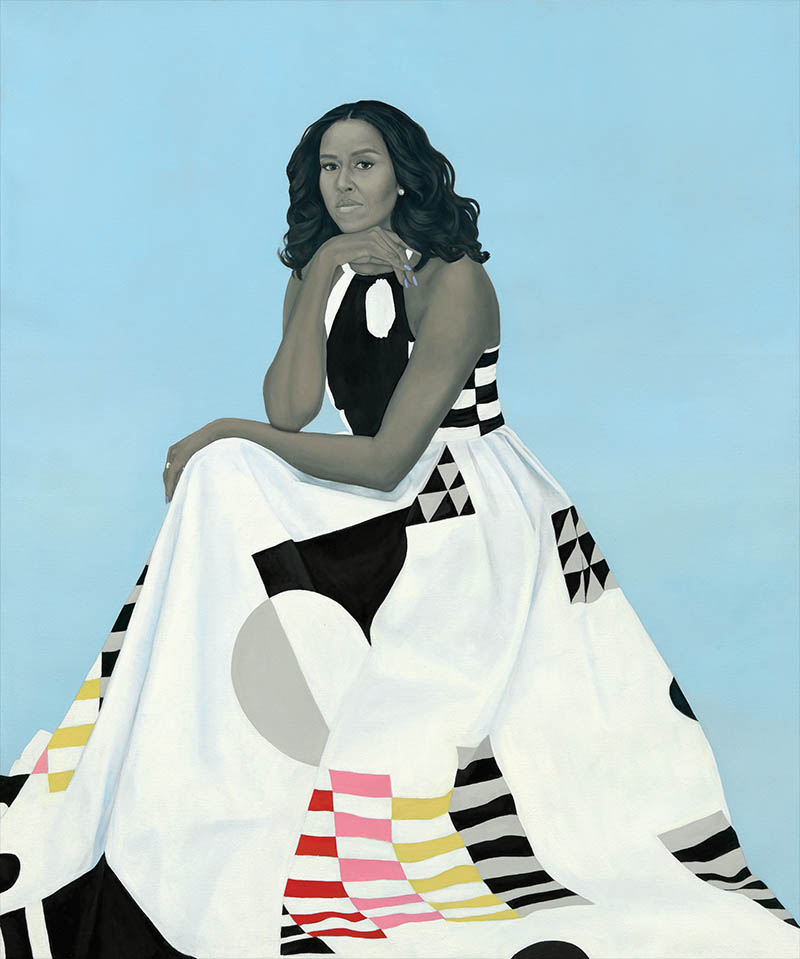 Michelle LaVaughn Robinson Obama is a lawyer, writer, and the wife of the 44th president, Barack Obama. She was the first African American first lady of the United States. As an advocate for healthy families, service members and their families, higher education, and international adolescent girls’ education, she has become a role model. Mrs. Obama remembers growing up on the South Side of Chicago and thinking “being smart is cooler than anything in the world.” After earning degrees from Princeton University and Harvard Law School, she joined Sidley Austin LLP, where she met Barack Obama in 1989. Guided by the desire to improve her community, she left the firm in the mid-1990s to begin a career in public service. She directed community and external affairs for the University of Chicago Medical Center prior to moving to Washington in 2009. During her husband’s two presidential campaigns, Mrs. Obama delivered poignant speeches that centered on her family’s commitment to serving others and highlighted the importance of her role as a parent.

In 2016, Amy Sherald became the first woman to win the National Portrait Gallery’s Outwin Boochever Portrait Competition with her painting Miss Everything (Unsuppressed Deliverance): https://portraitcompetition.si.edu/content/amy-sherald. Based in Baltimore, Maryland, Sherald focuses on African American cultural history and the representation of the African American body. She uses a grayscale to paint skin tones as a way of challenging the concept of color as race. This grayscale technique, also called grisaille, is connected to the artist’s early personal experiences. Sherald, who was born in Columbus, Georgia, remembers looking at family photo albums as a child and getting to know her grandmother Jewel through a black-and-white photograph. She was captivated by her grandmother’s beauty, self-possession, and confident, direct gaze in the photograph. When Sherald looked for painted portraits of people who looked like her in art history books in local libraries, she realized that her family’s story was absent in the history of painted portraiture. She was also discouraged when she did not find people who looked like her in the public spaces of museums. Sherald’s larger project of painting portraits of African Americans seeks to make up for this absence by addressing the history of representation. She has notably described her paintings as a “meditation on photography.” Her subjects are often set in whimsical, nondescript settings with occasional surreal details that add a bit of satire. The dreamlike backgrounds create what the artist refers to as “the amorphous personal space of my own existence within the context of black identity and my search for ways to clarify and ground it.”

The portrait celebrates Michelle Obama, the former first lady of the United States and the wife of the 44th president, Barack Obama. In this elegant and enigmatic painting, she gazes directly out at the viewer, hand under her chin, inviting contemplation. Painted using the artist Amy Sherald’s signature grayscale, Mrs. Obama’s unnaturally colored skin asks us to consider both her race and her humanity. While the use of gray in lieu of more natural skin tones reduces the reference to her race, the blunt removal also draws attention to her skin color, highlighting her racial identity. The gray tones, in particular, reference nineteenth-century photographic traditions, wherein the emerging photographic medium allowed free African Americans to celebrate themselves and craft their own unique (and positive) identities. Whereas the grand portraiture traditions of painting and sculpture were largely out of reach, photography was an accessible medium. Instead of representing a particular time or place, Sherald strives to make Mrs. Obama timeless and therefore eternally relevant for viewers. Dominating the composition is Mrs. Obama’s monumental dress. Designed by Michelle Smith, for her label Milly, and selected for the portrait by Mrs. Obama, Sherald, and Mrs. Obama’s stylist, the dress is symbolic, referencing the former first lady’s modernity and approachability. While the dress was originally designed by Smith with modern art, such as Pop and Op art, in mind, Sherald recognized its visual affinities with the quilts of Gee’s Bend, Alabama. The quilts of Gee’s Bend, a remote black community of the descendants of former slaves, are bold and improvisational, and reference the independence and resourcefulness of the African American experience.

Amy Sherald received first prize in the 2016 Outwin Boochever Portrait Competition for an oil on canvas titled Miss Everything (Unsuppressed Deliverance). Every three years, the National Portrait Gallery invites artists who are at least eighteen years old to submit their work to the Outwin Boochever Portrait Competition. The competition welcomes all media, including painting, drawing, sculpture, photography, textiles, video, performance, and digital or time-based media. The competition’s focus is on broadening the definition of portraiture and highlighting the genre’s relevance in contemporary art. Artists are encouraged to think about portraiture’s potential to engage with the social and political landscape of our time. The juried competition results in an exhibition of about fifty finalists, with the prizewinners announced at the opening. The winner receives a grand prize of $25,000 and an opportunity to create a portrait for the Portrait Gallery’s permanent collection. A fully illustrated publication accompanies the exhibition. The competition is named for Virginia Outwin Boochever (1920–2005), a former Portrait Gallery docent whose generous gift endowed this program. Amy Sherald says: Miss Everything was inspired by Alice in Wonderland. The big dress, the teacup. You’re left with the impression that she’s playing dress up but that she’s also striving for something different than who she is. And seeing herself in a way that other people may not see her. Miss Everything is who she is now in this present moment. The idea of being seen as anything other than the color of her skin. Her name is Krystal. It took us about an hour just for her to relax to give me that pose where her shoulder went up and her chin went up and she just became Miss Everything in that one moment.

• What aspect of the portrait do you notice first and why?

• Michelle Obama’s dress dominates the composition. Describe her dress. What shapes do you see? Why might the artist have chosen to highlight this element of the portrait?

• Michelle Obama and Amy Sherald both expressed an interest in bringing “black and brown bodies” into the museum. How does this portrait accomplish that goal?

• How does this portrait express Michelle Obama’s individuality?

• Michelle Obama is the first African American first lady of the United States. “How” she is represented and “who” painted her portrait are important considerations. Why? How does Mrs. Obama stand for more than just herself through this portrait?

• How does Michelle Obama’s portrait connect us to past artistic traditions? Why might it be important to look to the past?

• Consider the artist’s use of color. How does the color palette help establish an overall mood in this portrait?

• Discuss the significance of Michelle Obama’s quote at the unveiling: “I’m also thinking about all the young people—particularly girls and girls of color—who in years ahead will come to this place and they will look up and they will see an image of someone who looks like them hanging on the wall of this great American institution. I know the kind of impact that will have on their lives, because I was one of those girls.”

• Michelle Obama once said, “When someone is cruel or acts like a bully, you don’t stoop to their level. No, our motto is, when they go low, we go high.” What did she mean by that? Do you agree or disagree? Why or why not?

• Michelle Obama said: “No country can ever truly flourish if it stifles the potential of its women and deprives itself of the contributions of half its citizens.” Consider the women in your life. Compose a group portrait of the women who inspire you through their accomplishments and actions.