The Return to Aztlan 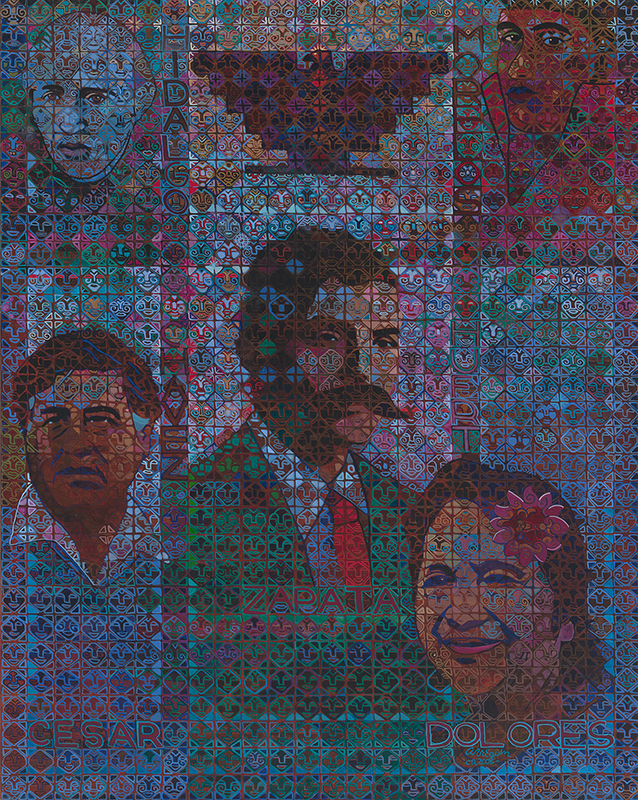 This painting links modern-era activists Chávez and Huerta to historic figures Miguel Hidalgo and José María Morelos (leaders in Mexico’s War of Independence) and Emiliano Zapata (Mexican revolutionary and champion of agrarian reform), who shared their Mexican heritage and a commitment to justice. The painting’s title refers both to the mythical homeland of the Aztec people and to the cultural realm of greater Mexico.

Encouraged by the civil rights movement, labor organizer César Chávez began in the early 1960s to protest the unfair treatment of farm workers in California and the Southwest, the majority of whom were Mexican or Mexican American. In 1962 he and Dolores Huerta founded the forerunner of the United Farm Workers of America (UFW). They joined the efforts started by Larry Itliong and his group of Filipino-American workers to boycott California table grapes. Their movement brought national attention to the field laborers’ struggle for better working conditions and led to incremental changes in farmworker labor practices.

Born in 1935 in the state of Michoacán, Mexico, Arreguín is influenced by the traditions, stories, art forms, and landscape of his native region. His work also reflects his love of nature and over five decades of life as an American living on the West coast in Seattle, Washington. Arreguín’s compositions frequently include images of Mexican or Mexican-American leaders, activists, and cultural icons in order to “Paint the memory of our heroic people in the context of their heroism”.