The Smithsonian’s National Portrait Gallery and its Director Kim Sajet welcomed more than 750 stars and luminaries from across the country to the nation’s capital for the 2022 Portrait of a Nation Gala Saturday, Nov. 12. At the red carpet event, seven honorees received the museum’s Portrait of a Nation Award for their wide-ranging transformative contributions to the United States and its people.

A performance by acclaimed jazz musician Wynton Marsalis drew guests from cocktails in the museum’s historic Great Hall to dinner in the Robert and Arlene Kogod Courtyard, where they were also treated to a New Orleans-inspired second line parade.

Sajet, Board Chair Joseph P. Ujobai, and other Smithsonian leadership shared remarks. As host of the dinner program, writer, producer and TV host Baratunde Thurston provided witty commentary. Presentations of the Portrait of a Nation Award were made by Laurene Powell Jobs to Andrés, Alicia Keys to Davis, Isabel Wilkerson to DuVernay, Hillary Rodham Clinton to Edelman, David M.Rubenstein to Fauci, Mellody Hobson to S. Williams, and Sonya Haffey and Isha Price to V. Williams. 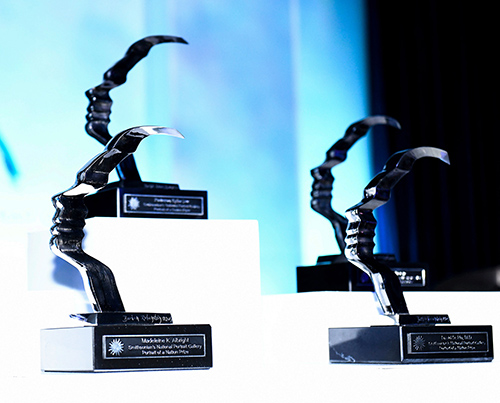 Portrait of a Nation:
2022 Honorees exhibition:

View the extraordinary commissioned portraits at the Museum. Learn more about the portraits and the artists here.